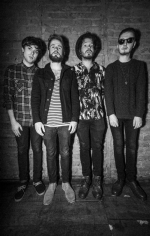 Wounds have announced they will release a new album titled ‘Die Young’ on 28th January via In At The Deep End Records.

It is the bands first release since guitarist James Coogan recovered from a near-death experience after he from a fourth floor balcony in a freak accident.

The video for ‘No Future’ can be viewed by clicking read more.