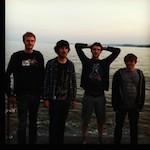 Southampton experimental rock band Waking Aida are gearing up for the release of their new album, ‘Eschaton’ on June 2nd. Now as a preview of what to expect from the full-length, the band have released a video for the track ‘Glow Coin’.

The video can be viewed by clicking read more, and “ will be released through Robot Needs Home Records.