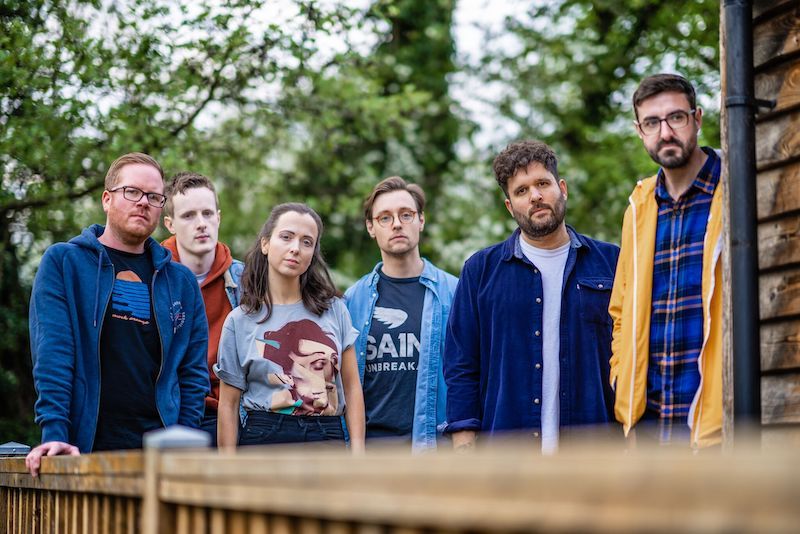 Blending Fleetwood Mac-influenced dual pop melodies, American Football math-rock guitars with a hint of rich 90’s emo, Watford sextet Lakes have developed their own brand of “glock-rock”. Later this summer, they’re set to release their debut album, ‘The Constance LP’. Having formed within the last two years, they released two EP’s (‘Tahoe’ and ‘Geneva’) in their first six months.

At the root of their songs, they cover subjects such as empowerment, not being afraid to make mistakes, dealing with mental health and breaking out of toxic relationships. It is the latter where ‘The Constance LP’‘s title track comes into play.

“The heart of the song is about breaking out of a toxic relationship; something which is often easier said than done,” explains vocalist/guitarist Roberto Cappellina. “When you’re in a less than ideal situation, be it an abusive relationship, or a one-sided friendship, your judgement can be clouded by wanting to believe that things will improve, even when the scales are so imbalanced. ‘Constance’ is about waking up, trusting your gut, kicking over those scales and moving forwards.”

Ahead of its release on August 2nd, we’re premiering the first of ten videos Lakes will be releasing for the album. Much like the song itself, it sees the band’s “gloc-shredder” Sam Neale running through a forest for freedom.

“The video was the first I’ve directed and edited, and was shot in an afternoon by a friend of the band, Amar Chundravadra. It’s the first of ten videos and each will follow on from the other story-wise, almost like a mini-series. We wanted to do something simple with no dialogue or opportunity for terrible acting,” Cappellina tells us. “The concept is Sam running through the woods, having just dodged a massive bullet by running away from her wedding, although this isn’t apparent until the big reveal right at the end when she reaches a lake (water = freedom = lakes = sickening metaphor!)”

‘The Constance LP’ by Lakes is released on 2nd August on Friend of Mine Records, with a limited-edition lake blue vinyl available through The LP Café.

If you have enjoyed reading this article and would like to help us produce more content and promote more great new music, please consider supporting us our Patreon page.