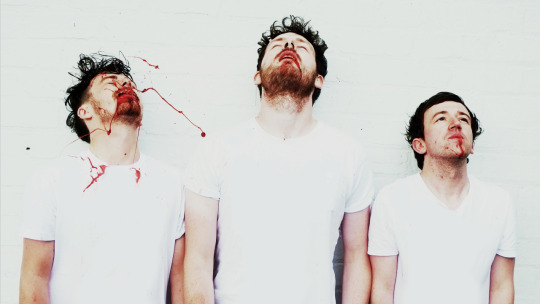 Next month, Welsh noise merchants GRAVVES return with a new EP called ‘Oh, The Joy’. It picks up where last year’s debut EP, ‘Rattle’, left off as the trio deliver a set of snarling, punk-fuelled songs with the occasional hook thrown in here and there.

With its release pencilled in for April 27th, we’re premiering the video for ‘Oh, The Joy’’s latest single – ‘Hello Sailor’. The EP’s penultimate track is a fuzz-laden stomp with David Thomas’ unhinged yelps merely adding to its viciousness. While the DIY video follows Hughes’ to get in shape as he prepares to help the skint band, as he enters a fight but it’s not what you think…

”’Hello Sailor’ is about getting through a breakup and feeling like it’s the worst thing in the world, but eventually picking up and moving on,” explains bassist Adam Hughes. ”We put the video together ourselves, which is mainly about Dave training for a proper important competition. Not giving too much away though – we’re hoping people find it as funny as we did to make it.“

‘Oh, The Joy’ EP by GRAVVES is released on 27th April on Loner Noise Records.