Versus: Weezer – ‘Pinkerton’ vs ‘Weezer (The Blue Album)’ 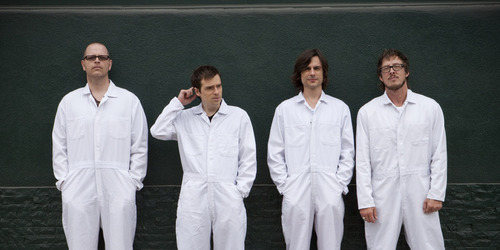 Forming in 1992, L.A. alternative rock band, Weezer, took the world by storm with their first 1993 self titled album (also know as ‘The Blue Album’ to fans), released through Geffen Records. After the touring cycle of their initially negatively received, but cult favourite 1996 second LP, ‘Pinkerton’, the quartet went on a hiatus due to life’s pressures and commitments, from 1998 to 2000.

They would eventually return at the dawn of the new millennium, releasing ‘Weezer (The Green Album)’ in 2001, ‘Maladroit’ in 2002, and ‘Make Believe’ in 2005. The band would eventually switch over to Interscope Records in 2008 to release their third self titled album (aka ‘The Red Album’), and ‘Raditude’ the following year. After an estimated two decades of being on major labels, they would sign to renowned indie label Epitaph Records and release their eighth studio album, entitled ‘Hurley’.

Besides releasing a multitude of albums, the band have had various incarnations in their line up; the only consistent members have been lead vocalist/guitarist Rivers Cuomo and drummer Patrick Wilson. In terms of style, Weezer are known for their catchy pop alt rock style, funny music videos and personal, awkward but charming lyrics. Their influence is found throughout all forms of alternative, punk and emo styles.

The band are currently in the studio, recording their ninth studio album, with Ric Ocasek, who previously worked on the ‘Blue’ and ‘Green’ albums. Speaking of which, this Saturday marks the twentieth anniversary of the aforementioned debut “blue” coloured album. To celebrate, we at Already Heard have decided to answer that controversial question: what is Weezer’s best album? To answer this, two individuals have battled it out in typical “Versus” style. In one corner, our own Alex Phelan returns for another round by stating a case for second album ‘Pinkerton’. On the opposite side meanwhile, Jack Brown of alt rockers Pretend Happy has decided to argue for that Twenty year old blue coloured debut LP.

What do you consider to be Weezer’s best album and why? Let us know on our Facebook and Twitter pages.

Pinkerton (by Alex Phelan)
‘Pinkerton’was never meant to achieve greatness. Weezer’s follow up to the hugely celebrated ‘Blue Album’ was a flop, mustering terrible sales figures and receiving heavy criticism from the media. It took the world a little while to realise the ugly duckling would soon turn into a beautiful swan for those who could spare the time and attention.

In stark contrast to their debut, ‘Pinkerton’ is a journey inside the darkest recesses of River Cuomo’s mind. It was written during a period of transition for him: disillusioned with the rock n’ roll lifestyle and taking up studies at Harvard. His disdain for an endless string of meaningless encounters comes to a head in the stripped down, exhausted outpouring that is opener ‘Tired of Sex’.

This is followed by the moody, passive aggressive grunge-pop of ‘Getchoo’ with Rivers admitting, “I can’t believe what I did to them, you’ve done to me”, as he comes to terms with being used rather than being the user. ‘No Other One’ on the other hand is far more fragile. You can picture him slowly strumming in his dorm room as he regards the cheating lover he couldn’t leave, and sings whatever words fall into his mouth.

What’s a typical trait of ‘Pinkerton’ is that its most twisted moments become the most beautiful. ‘Across The Sea’ is a touching, heart-wrenching love song – about a Japanese schoolgirl who wrote Rivers a letter. Lyrics like, “So I sniff and lick your envelope and fall to pieces every time”, would make you cringe if it didn’t sound so goddamn majestic.

‘The Good Life’ was written after Rivers had an operation to lengthen his shorter leg, leaving him requiring painful rehabilitation. But it’s a triumphant anthem for accepting who you are, and he announces gleefully that he’s fed up of hiding from the world and is ready to return to “shaking booty, making sweet love all night”.

‘El Scorcho’ is possibly the best known song on ‘Pinkerton’, which is another contradiction because it’s hardly the most radio-friendly. A bending lead guitar stumbles through the verse before the chorus explodes out of nowhere, before just as quickly disintegrating back into weirdness.

The masterpiece comes to a close with ‘Butterfly’, an astonishingly sad song about damaging every girl you meet and realising that settling down is a dream. Rivers reduces your heart to mush as he laments “I told you I would return when the robin makes his nest, but I ain’t never coming back… I’m sorry, I’m sorry, I’m sorry”.

‘Pinkerton’ is the dark to ‘Blue Album’s light, and if the latter came close to achieving pop-rock perfection, then the former comes even closer to faultlessness, albeit a far more tragic, melancholy ideal. Nonetheless, it is utterly spellbinding.

Weezer [The Blue Album] (by Jack Brown, Pretend Happy)
I’m gonna have to go and say that ‘Weezer’, or ‘The Blue Album’, would have to be my all time favourite Weezer record. I remember the first time I heard the chord sequence to ‘Say It Ain’t So’ and instantly picked up the record.

This in my opinion was the pinnacle of Rivers’ writing ability – it’s just flawless through and through. It was something different, but musically and aesthetically to be delivered from a band, especially from a debut – and I think that’s what immediately grabbed my attention. They’re also a very humorous band, with ultimately one of the most hilarious yet brilliant music videos for the classic ‘Buddy Holly’.

This album also taught me that you don’t need to do anything crazy or insane to create such a brilliant piece of work. Weezer kept it simple yet impactful on this record; for example, the distorted, prominent guitar bends in the chorus of ‘Say It Ain’t So’ compliment the song so well and deliver the underlying anger in a way vocals couldn’t.

This album is a fusion of pop, grunge, geek rock with a trademark Weezer stamp on it – the production is raw and honest, just like the lyricism throughout the record.

‘MMXIII: A Collection of Old Songs’ by Pretend Happy is out now.