Versus: New Found Glory – ‘Sticks And Stones’ VS ‘Catalyst’ 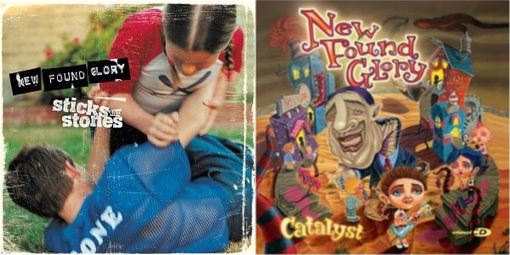 I don’t know if you knew, but New Found Glory played the UK last week. Well, you may have known. Actually, you probably did considering how big NFG are. You probably knew then as well that they played ‘Sticks And Stones’ in full. WOW. Dream come true, right?

Well, WELL, you see… some of our site don’t agree that this is their best album! I mean, it’s widely regarded as being ruddy darn good across the team, but someone had to fight the opposite corner for this ‘Versus’ to work, right? Right. So, welcome new competitor Tom Knott defending ‘Sticks And Stones’ “because it was awesome when I saw it last week!” and Sean ‘Top Dog’ Reid who’s backing ‘Catalyst’ in all its glory.

Let’s see who wins! I guess this could be HIT OR MISS! Sorry, I really felt a typical journo pun was needed.

‘Stick And Stones’ (by Tom Knott)
It’s asking the almost impossible for me to say outright that I thought any New Found Glory record was the band’s absolute best. Still flying high after an incredible fifteen-year career New Found Glory have produced seven of my favourite albums but there’s something about ‘Sticks and Stones’ that always draws me back. Coupled with the fact that over the last week the band performed the album in its entirety, giving it the full treatment of their superbly energized live show, I’d happily go to the wall in its defence.

Every track is a killer. High-octane, sing-a-long brilliance that doesn’t once let up from the first super powered chords of ‘Understatement’ to the final bouncing chorus of ‘Anniversary’ this ispop-punk at its finest – the ultimate soundtrack to good times and best friends. Even third track ‘Sonny’, the one sombre moment on the album, begs to be sang right back. No matter how emotional the song gets, and it’s a heartbreaker, the energy is still as high here as it is in the even-your-nan-knows-this-song lead single ‘My Friends Over You’.

‘It’s Been A Summer’ is a song as beloved by fans as any of the band’s hit singles and ‘Forget My Name’ is always a highlight of any New Found Glory show. Chad Gilbert himself told the crowd in Nottingham last week that was why it was one song from the album that they have always played and it’s obvious why. An album track, not a single, not widely known by anyone not considering themselves a New Found Glory fan and yet as the drums bring the song to life thousands of kids (those who were ‘kids’ back in 2002 and those who are just discovering NFG now) lose it.

New Found Glory have been playing these songs live for more than a decade and still they hold up. That’s not to say that classics from their breakthrough self-titled album, ’Hit or Miss’ and ‘Better of Dead’ being the biggies or the monstrous ‘All Down Hill From Here’ from the incredible ‘Catalyst’ don’t.But that for me is what makes ‘Sticks & Stones’ the best of the best. Every song on this album is a classic, a fan favourite, and for a band like New Found Glory who thrive in a live environment it’s these that make them so special. ‘Sticks and Stones’ is an album as close to my heart in whole as any one song by the majority of the bands I loved when I was younger and yet somehow, it’s a grower. The older I get the more I adore this band and this album. Energetic sing-a-long verses, heart swelling backing vocals, and colossal chorus after colossal chorus. Released in 2002, I’d be surprised to see this far from the top of any pop-punk lover’s Albums of the Century when the time comes.

‘Catalyst’ (by Sean Reid)
When I was asked to pick a New Found Glory album for this edition of ‘Versus,’ I didn’t know where to start. Being a big fan of Pop Punk and with New Found Glory pretty much consistently delivering great Pop Punk albums doesn’t make it an easy task. From the vibrant Self-Titled release (don’t forget ‘Nothing Gold Can Stay’ came first) all the way through to last year’s ‘Radiosurgery,’ the Florida group have always produced great albums and have had an instant appeal  to me; yes I even like the debatable ‘Coming Home’ record.

However after much thinking of picked out ‘Catalyst’ as the bands best album. Sure the Self-Titled album has all the characteristics that we all know and love NFG for but I feel it loses its momentum in the middle, and even though ‘Catalyst’ is slightly long (especially when you include the numerous b-sides and bonus songs.)

Nevertheless for me ‘Catalyst’ was the album that made me a NFG fan. Before they were just one of those bands mixed in the Blink-182, Sum 41, Good Charlotte crowd of the early 2000’s yet with ‘Catalyst’, I was instantly hooked from the start. The blistering intro and the one-two punch of opening tracks; ‘All Downhill From Here’ and ‘This Disaster’ gives the album a near-perfect start.

Admittedly it’s not the all-out fun, harmless Pop Punk shown on previous releases yet there’s still growth and throughout NFG’s sound is tighter. There’s plenty of variation; from the chugging guitars of ‘At Least I’m Known For Something’ to the slightly cheesy (okay, very cheesy) and radio-friendly ballad that is ‘I Don’t Wanna Know’ to honed, classic NFG sounding tracks like ’No News Is Good News’ and ’Failure’s Not Flattering’ with its quirky synth keys. ‘Catalyst’ has it all and unlike a few NFG albums, it demands your attention from start to finish.

For new fans who are only just discovering New Found Glory (where have you been?), ‘Catayst’ is a must buy; all-round classic Pop Punk with a hint of sincerity thrown in for good measure. You can’t go wrong.