Versus: Hot Water Music – ‘Caution’ vs ‘Exister’ vs ‘No Division’ 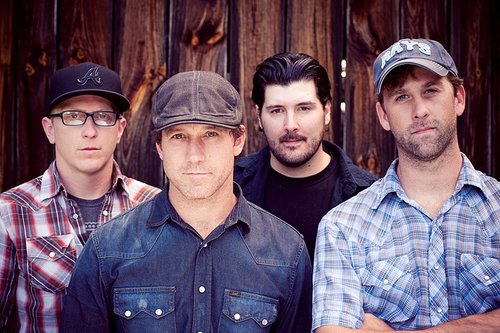 Since forming in 1993, Gainesville, Florida’s Hot Water Music have been an influential beating heart in the genres of punk, hardcore, post hardcore, indie rock and emo. Named after a book by Charles Bukowski, the band consists of guitarist/vocalist Chuck Ragan, vocalist/guitarist Chris Wollard, bassist Jason Black and drummer George Rebelo. Despite having broken up and reformed various times in their career, the line up has been consistent.

The most recent split was in 2006, where Ragan left the band to pursue a solo career causing the other members to restructure themselves as The Draft. Eventually, by 2008, the gruff laden quartet returned, and have been ploughing through ever since.

There discography is filled with seven studio albums, over a dozen EPs and two live albums. They’ve been signed to the likes of No Idea, Doghouse, Epitaph, and more recently Rise Records. Yet as previously mentioned, they have an undying vast imprint on the alternative scene as we know it.

In honour of the release of Chuck Ragan’s fourth album ‘Till Midnight’, we at Already Heard have thought it only right to argue which of his band’s albums is best. In one corner, Jay Sullivan stands by their more recent effort ‘Exister’; over the other side, Alex Phelan raises fifth LP ‘Caution’ on to the pedestal. Additionally, Aaron Lohan has decided to represent and argue why their earlier efforts shouldn’t be forget, which he does via a piece on third effort ‘No Division’.

What do you consider to be Hot Water Music‘s best album and why? Let us know on our Facebook and Twitter pages.

Caution (by Alex Phelan)
Hot Water Music’s decision to make Epitaph Records their new home in 2001 was a divisive one to say the least. Their first album on the new label, ‘A Flight and a Crash’, was a far more accessible release than anything they did at No Idea. The songs were simpler in structure and more tuneful than their earlier material.

Some took this as a cue to rather ridiculously brand them as sellouts. More the fool them, for a year later Hot Water Music released their opus in ‘Caution’, and all of a sudden, all the naysayers had very little naying to say at all.

What ‘Caution’ does is build on the new foundations laid by the previous album whilst including everything that made them a brilliant band in the first place. Yes, it’s still very accessible: you could even call it poppy. I certainly couldn’t have danced to them at a night club if it wasn’t for this album. At the same time, it’s shrewd and bold, and includes many of the finest songs in their impressive arsenal.

I wonder if there’s a more recognisable beginning to a contemporary punk rock record than Chuck Ragan’s throat-shredding volley of “I need a remedy! Of diesel and dust, something I can taste with a fix I can trust”. This is the stuff that gets hearts throbbing and fists pumping show after show, year after year. Well over a decade after release, it still sounds as alive, as fresh and as relevant as it ever did.

After ‘Remedy’ follows the somehow even more anthemic ‘Trusty Chords’, which is a classic example of everything that makes this album a world-beater. Everything the guitars and bass are doing is wonderfully unique. No instrument is a passenger, all are equal parties in the masterpiece, and whilst these tracks may be uncomplicated at face value, there are layers here such that no two listens feel quite the same.

Chris Wollard takes charge of the vocals for the emotionally charged ‘I Was On a Mountain’. It’s a reminder that all you have and hold dear can be gone in a second, and you can feel the anguish and remorse in Chris’s voice as he warns, “Caution! The solid ground you are on will slide from under you”.

Another facet to ‘Caution’ is the fantastic lead sections that ripple through every song. There’s no fear of allowing the rhythm section to carry the tune and let the guitars run wild, criss-crossing each other in an almost jazz-punk style that is frankly dazzling.

‘The Sense’ is an uncharacteristically lightning fast track that combines Chuck and Chris’s vocals perfectly. Chuck traditionally shouldered the vast majority of the vocals for the band but ‘Caution’ represents the point where their choral pairing because a true tour de force. Here Ragan’s fiery, rugged vocals are the engine and Wollard’s stirring, more melodic delivery rides sidecar.

The theme of suffering and recovery which flows through ‘Caution’ is picked up again on ‘Alright For Now’, as Chuck confides “I’m alright for now but I haven’t been, got lots of shit behind me”. It’s a line which embodies the cathartic nature of an album which never comes across as whiney but instead a victory for the soul’s better angels over its demons.

The ending of ‘Caution’ is every bit as jaw-dropping as its beginning. You have ‘Wayfarer’, a triumphant blast of positivity as we come out of a dark, emotional journey into the light. The song is structured around big, bold choruses of harmonised “woahs”, which far from sounding lazy and generic, are sung in such a layered, well-crafted manner that they sound iconic.

Finally comes ‘The End’, dynamic with a wonderful groove combined with brash, punky confidence. Chris proclaims, “These complicated words, are coming down, I’ve searched for them so long”,  and you get the feeling that everything Hot Water Music strived for has suddenly all come together.

‘Caution’ is the jewel in the crown of a band as respected in punk rock as they are in hardcore, as not only great songwriters but incredible musicians. They’ll never make another one quite like this.

Exister (by Jay Sullivan)
The excitement I felt on hearing the announcement of ‘Exister’ was the musical equivalent of the second-coming of Christ.  Even after a return from a lengthy hiatus, there was a period in which the band played only a handful of shows, so the release of ‘Exister’ was unexpected to say the least.  Of course, waiting a long time for an album is all well and good, but as we’ve all learned from ‘Chinese Democracy’, delayed gratification only works if the album isn’t shit.

So it’s fortunate that Hot Water Music’s return was also one of the crowning glories of their career. Blending the best of Chuck Ragan’s solo output with the finer moments of ‘Caution’ and ‘A Flight and a Crash’, ‘Exister’ is without a doubt the perfect mould of Hot Water Music’s varying styles. While some purists will complain that they failed to produce an album that sounds similar to their heavier early releases, we can’t all remain stuck in 1996, and ‘Exister’ has a modern, bluesy feel – even if it is slightly poppier than their usual efforts.

From the gravelly tones of ‘Boy You’re Gonna Hurt Someone’ to the  emotive chorus of ‘Drag My Body’, of which the opening line “I got my heart up in a beautiful mess” was the moment I realised I loved this album, there are plenty of jaw-dropping moments to be found here. Songs like ‘State of Grace’ and ‘Pledge Wore Thin’ showcase Hot Water Music’s song writing at their very best, which is why ‘Exister’ remains my favourite release even after years of solid listening.

No Division (by Aaron Lohan)
Whilst I would argue that ‘A Flight and a Crash’ is my favourite Hot Water Music album, based upon the contestants in the ring, I felt like the early era needed a representative voice. Originally, I was going to write about debut LP ‘Fuel for the Hate Game’ to defend this period. That was a record built upon raw desperate yells, thickly sharp chords, jazz like rhythms and heart entrenched harmonies. Instead, I’ve decided to talk about third album ‘No Division’, and here’s why.

I’ll attest that the aforementioned debut and follow up ‘Forever and Counting’ helped to establish this Gainesville bunch in the underground circuit, yet it wasn’t until ‘No Division’ that they expanded further. This album acted as a bridge between this early period and the later, more renowned records people are familiar with. More importantly, it’s a fantastic piece of contemporary punk to end the first chapter in the living, breathing tale entitled Hot Water Music.

Opening tracks ‘Southeast First’, ‘Free Radio Gainesville’ and ‘Our Own Way’ are adrenaline charged to first pump all the blood of your emotions into one clenched fist. The thickly innovative structure now had a faster pace to it, with raspy choruses you can scrub on the hard surface of one’s psyche. ‘At the End of the Gun’ meanwhile is the perfect drive time song; its melancholic twinkle towards the end wells up in a country tinged crescendo of adoration. Second to last song, ‘Driving Home’, takes these feelings to a whole new level in ambiance, reflection and repetitive tappings on the door. However, its highlight ‘Rooftops’ which takes the spotlight; “Hey world are you listening?” shouts the band in unison, an anthemic summary of the woes and toils told on the LP. Thematically, this is a record which successfully blends the socio-political with the personal into a vial. Once injected into the soul, it feels like it relates to you, and to everyone else, making it a unified troupe.

Looking over what I have written, I may have convinced myself that this is the best Hot Water Music record. Regardless, in whatever age of the band’s career, there is gold to be heard, and for their earlier period, I nominate this one.

‘Till Midnight’ by Chuck Ragan is out now on SideOneDummy Records.