Versus: Every Time I Die – ‘New Junk Aesthetic’ Vs ‘Ex Lives’ 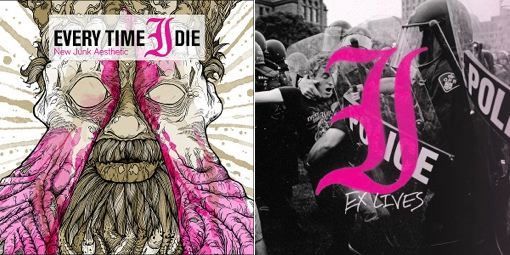 The underground heavyweights throwing hardcore, metal and southern rock into a cage and seeing who might just get out alive. Ladies and gentlemen, I present to you Every Time I Die; heroes and legends in every right and not capable of releasing a bad record (fact).

And of course, that leads us to our very own ‘Versus’ feature and that one question everybody wants to ask the great one in the sky. No, not the meaning of life question… the question about which albums is best (The meaning of life is to listen to Every Time I Die of course). So, Aaron Lohan and Mikey Brown bring ‘New Junk Aesthetic’ and ‘Ex Lives’ respectively to the cage. Be prepared for blood…

‘New Junk Aesthetic’ (by Aaron Lohan)
If you were to ask me “what is the best album by southern metal infused hardcore heroes Every Time I Die?”, then you would basically find the little man powering the wheels of my brain to become crushed and overwhelmed by the huge cogs that keep my mind in motion. Every Time I Die is one of a small minority of bands who have the desirable talent of making a record that is superior to the records that precede it. It is an abomination to deny that the band’s latest effort ‘Ex Lives’ continues the ever increasing sky dizzying epitome that they have made with every ounce of blood and sweat. However, whilst on one hand you could say that ‘Ex Lives’ is their definitive based on my aforementioned summary of it, after much calculation and cosmic soul searching, I believe that the band’s best effort lies in the musical and lyrical cellular structure of their fifth full length ‘New Junk Aesthetic’.

Combining all the best elements that made their previous efforts such as the frantic tenacity of ‘Hot Damn!’ and the hooky hard rock structure of ‘The Big Dirty’, ‘New Junk Aesthetic’ has a bold and crisp production that saw a cult phenomenon achieve a focused state of being that would enable them to utilise all the resources and skills they had gained in their career to refresh the cycle of turning the listener inside out with their organs and bones exposed.

The riffs that swarm this album are like a zombie horde coming your way, the hands of which pry at your skull, crack it open, and then let the fingers mess with the parts of the brain that are in charge of your ears. The magic behind such dirty riffery provides an oily catalyst that shifts from charged throat grabbers such as ‘After One Quarter Of A Revolution’ to slow chugging hooks as found on ‘Roman Holiday’.

Lead vocalist Keith Buckley is unsurprisingly brilliant and unstable with his versatile mannerisms; frantically shouting as if he’s stuck in his own psychiatric lock up one minute, suavely and coolly seducing you into bed with his singing voice the next. What shouldn’t be ignored is the man’s cryptic pen writing abilities that portray the best imagery of the last decade; lines such as “I dropped my conscience and cast another stone” (‘Wanderlust’) and “My cancer came knocking, it was dressed to the nines so I peeled back my skin and I let it come inside” (‘Host Disorder’) are so cleverly written to put across themes that involve psychological and social human politics.

A definite highlight of this record is the three tonne bullet of guest vocals that the band has recruited. Both Matt Caughtran of The Bronx and Greg Puciato of The Dillinger Escape Plan sound completely in their own element when they unleash their vocal parts; whether it’s the face melting shouts from Greg on ‘The Marvellous Slut’ or the grit fuelled antics displayed by Matt on ‘The Sweet Life’, there is no denying that they add a much needed weight to these songs.

Looking back at the beginning of my argument, I can safely say that in agreement with my own unconscious self-state of mind that the question to the best Every Time I Die album is indeed answerable. ‘New Junk Aesthetic’ sees the band at their most impressive and is the recommended record that will click your skull on back to front if you want to get into the band.

‘Ex Lives’ (by Mikey Brown)
If ever there was a band who could consistently blow my mind with every release, and then again when I go back through their entire catalogue, it’s Every Time I Die. Whilst each release is suitably impressive and even harder so to simply define one as their upmost defining effort, I would have to go with ‘Ex Lives’. Whilst many will probably disagree with both myself and probably Aaron as well, choosing earlier albums as their favourite, I do want to point out that ‘Ex Lives’ to me is a collation of everything Every Time I Die at that point in their career whilst also being a whole new chapter in the forthcoming godlike anthology of the band.

Case 1: The drums. Bang those drums to hearts content Legs, because you are absolutely crucial to this band. New drummer Ryan ‘Legs’ Leger is the latest addition to the family and is an absolute machine to say the least, and that really isn’t a hyperbole. Ryan brings more complex drum patterns to ‘Ex Lives’ and that’s always going to make for a more interesting listen.However, it’s his speed. For me, I think his ability to hit those skins at a million miles an hour really plays a huge part in boosting the aggression of the music alone. Who listens to slow music when they’re angry? No, nobody does. When you’re pissed off you listen to balls out, fast and in your face music. Every Time I Die are this band for so many people and Ryan certainly brings this.

Now of course that’s not the only key ingredient. It wouldn’t be an Every Time I Die record without Case 2: Those menacing guitars. Andrew and Jordan duel away gruellingly for your listening pleasure, providing some of the best riffs to ever stay etched into your memory and displace any memories of your 7th birthday. It’s these riffs that provide that can provide the melody but can also provide some outrageously dirty and heavy drops that’ll switch your monster mode like when Gremlins hit water. Admit and accept that this album has some nasty guitar work and we’re good. And of course nasty here is used in a complimentary sense. If it’s dirty it’s downright delightful.

Following on I lead you to Case 3: Keith Motherfuckin’ Buckley. Now, apologies for my language but anyone who’s listened to Keith before will surely already appreciate his lyrics and vocals for all they’re worth. Opening line of the album ‘I want to be dead with my friends’ is surely one of the best opening lines of an album EVER as well as an apocalyptic start to all future Every Time I Die shows. Lines like ’I have hundreds of costumes, but not one disguise’ and ’From the cradle to the grave it has been a walk of shame‘ are so descriptive that they can be translated and reflected upon by so many different people. It’s genius like that which is so simple yet so transferrable and wins my vote.

This is actually the last paragraph I’ve written as I almost forgot to go back to Buckley. Listening through the album as I listen to this I reached ‘Revival Mode’ which was a bit of a shock when it first came out. Let’s reiterate; it’s brilliant. It’s another side to Every Time I Die whilst still sounding like Every Time I Die. It sounds like it could be in a horror movie soundtrack and doesn’t need to use Buckley’s growl all of the time to get across the Every Time I Die message. Like I said, ‘Ex Lives’ is another chapter and I think this song alone is a solid example of that.

They’re the official cases, but the other obvious thing is the production is so much better than back in those early days. It’s good to hear a band like this sound crisp and clean but in the dirtiest way possible. And to round off, this album is brilliant. It’s pure Every Time I Die gold and ‘Ex Lives’ should be your favourite as well.

Every Time I Die are currently touring the UK. Dates can be found here.