Home » Features » Versus » Versus: Anti Flag – ‘Underground Network’ VS ‘The Terror State’

Versus: Anti Flag – ‘Underground Network’ VS ‘The Terror State’ 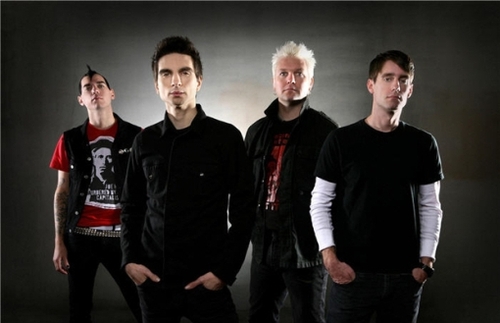 20 years is a long time. 20 whole years. 20 doesn’t seem like a big number, but when you consider how long a year is it’s like, “woahhhhh!” So, the realisation that Anti Flag have been a band for 20 of these years is pretty damn crazy. Think about the amount that has happened in the last 20 years! The London Olympics, the deaths of celebrities such as Michael Jackson and even, unfortunately, war.

And that leads us very well onto Anti Flag, a punk band from America who are well known for their left wing views, focusing on topics such as class struggle, human rights and anti-war activism. The band also publicly support Greenpeace, Amnesty International and Occupy Together.

Now then, their MUSIC. They’ve released 10 whole albums since 1996, so it may be a bit of a struggle to decide where to start, right? Wrong! Two of our very own writers have defended their favourite albums, those being ‘Underground Network’ (courtesy of Tom Knott) and ‘The Terror State’ (thanks to Aaron Lohan).

‘Underground Network’ was Anti-Flag’s first release on Fat Wreck Chords and is generally considered the one that gave the band their first breakout from an exclusively underground to a much wider audience. The reasons for this are, as is always the case, multiple. Obviously, signing to Fat Wreck didn’t do their appeal any harm but I would argue that above all else, it was the sheer quality of the release that took them that extra step.

Whilst previous Anti-Flag albums received critical acclaim at the time of release and in the time since there’s the distinct feeling of a band still finding their feet around certain songs. Neither of their first two records (or the 1998 release ‘Their System Doesn’t Work For You’) flows as well as ‘Underground Network’. This was the album on which Anti-Flag settled on the formula that would see them through to the present day in blistering style.

That formula is most apparent on ‘Bring Out Your Dead’, sang by bassist Chris #2 and driven by one of his now iconic bass lines – this is one of those songs that comes along once in a while and blows the competition out of the water. It’s a song of absolute fury that could not have been pulled of by the band in previous years. Not least because until ‘Underground Network’, #2 was either not present, or not considered a lead vocalist. Since ‘Underground Network’ many of the band’s best songs have been lead by the bass maestro – a man’s whose ability to play the four-string has influenced an entire generation of punk bassists – and that alone, for me, is enough to give the record the plaudits. It was the start of something absolutely brilliant.

Not to take anything away from Anti-Flag’s eternal singer, Justin Sane, who continues to be the primary vocalist here as he has before and since. This record features a host of fan favourites – opening track ‘Angry, Young and Poor’ is one of the best – steaming punk rock with a chorus to die for. A song that you might sing along to for hours if it wasn’t followed by twelve more gems, each as catchy, honest, and furious as the last. ‘Underground Network’ is also home to the ridiculously fun ‘Spaz’s House Destruction Party’, Justin’s retelling of three nights of utter chaos masterminded by a long time friend of the band. I could list the whole record, there really isn’t a weak song in the bunch. ‘Daddy Warbux’ is another #2 lead monster. Outraged, fast, and with a bass / vocal ability that doesn’t seem possible. The title track itself is unbelievable at times – a simple riff and a positive mindset. A thousand bands have songs like that and so will a thousand more in the future. But if any of them manage to squeeze an ounce of Justin Sane’s hope into their songs, the world would be a much nicer place to live in.

Some people love to hate Anti-Flag and others grew up and found themselves ashamed to love them anymore. Their politics, in the songs at least, seem too idealistic to some but I won’t get into that too deeply because that’s a matter for another night and a long debate. Is there a bad way to get kids into politics? Probably not and this is the record that really gave the world the band to do just that. If you can listen to this album without getting excited, without wanting to do something, and without sitting slack-jawed at some of the bass playing, then I pity you. Anti-Flag have made a good number of astounding albums and picking my favourite was a chore to say the least, but just listen to #2 on ‘Bring Out Your Dead’ and help me decide if the vocal delivery or the bass line (yup, it’s a simple run but it takes an incredible ear to pluck up something that good) is the best thing about that track. Because that song alone both sums up this album as a whole and the anger, skill, and sheer refusal not to shirk the melody that makes ‘Underground Network’ not only the best Anti-Flag record but one of the best punk records full stop.

The Terror State (by Aaron Lohan)
Twenty years is certainly a long time for a band to be alive and running. Only a quarter of Anti-Flag’s lifetime have I been a fan of the band. Take them or leave them, Anti-Flag have had one hell of a career. At this point, many bands have appreciated the band’s influence on the punk scene and any related genres. Even during their brief major label period, the band played by their own rules, supporting the charities they backed, playing fantastic live shows across the globe, and simply giving a crap about their views. To this day Anti-Flag still give a crap, passing on their socio-political messages as best they can and providing an aura of positivity and community.

Yet what about the material they’ve written over the years? Having a huge discography, many are split as to what is the band’s best record. From my own opinion, this belongs to 2001’s ‘Underground Network’. Unfortunately, my fellow writer is writing a piece on this, so I’ll be backing what I think is the band’s second best full length; this goes to the angry yet polished work entitled ‘The Terror State’.

From the controversial artwork, which features a child soldier amongst rubble and ruin, you become interested in what the band have to say through sound. Track after track, there’s a very consistent structure. Catchy songs contrast the furious and melodic to a passionate and balanced enjoyment. Anti-Flag were at their most polished, but still had that fire. Despite being their last record to be released on an independent label, i.e. Fat Wreck Chords, the band laid out the plans, and showed they were prepared and capable of transitioning to a major label without losing their integrity.

The themes reflected a quintessential classic socio-political punk rock album. Subjects that were easy to understand and providing a basic 101 training on politics; I myself am not very invested in politics but albums like this gave me a basic understanding and opinion on the matter. Indeed, Anti-Flag provided a relevant opposing argument on the Bush administration and the political hot topics of its time.

As for the songs themselves, what can I say? Each one is a memorable and standout anthem in the band’s discography. The acoustic intro on ‘Turncoat’ lures you into a fun and angry educational tip on corrupted politicians; the reggae influenced ‘Post-War Breakout’ has an unmatchable groove ridden bass and fire to it; and the positive messages on ‘Power To The Peaceful’ contrasts wonderfully with the violent imagery it rallies against.

Behind these songs though lies a furious energy, which is capable of causing a huge fun filled circle pit. Chris #2’s eager bass, Justin Sane’s yells, that buzz melodically filled guitar playing, and Pat Thetic’s easy but well-timed drumming… what can I say, it’s a great album.