For this month’s edition of Under The Radar, we look at new releases from Russian Girlfriends, Swimming Girls, Lake Acacia, The Hard Word, Born Free, A Traitor’s Last Breath and BLKLST.

Russian Girlfriends – In the Parlance of Our Times 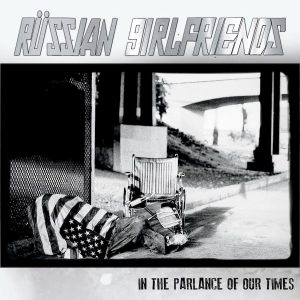 Besides screwing with your search algorithm, Albuquerque quintet Russian Girlfriends are sure to make an impact in your life. ‘In The Parlance of Our Times’ is their second full album, following on from a couple of splits, and with its catchy blend of hard-edged, punky rock n’ roll, they deliver a highly listenable, rapid-fire selection of rocking tunes that really hit the spot – think Bowling For Soup meets the Dead Kennedys.

‘Coke’ provides a minute of hardcore fury to get the train running, before a nod to Black Sabbath’s War Pigs on the superb ‘Angry Bong Rips’, which is simply brilliant with lines like “Now we’re so high, you can taste snow caps on the conifers” and “Selfies can’t save your soul girl, no one looks good in skinny jeans”.

We get another ten similarly frantically paced tracks, but their infectious sense of melody and the head-spinning variety of riffs keeps the whole shebang fresh and engaging. The story on ‘The Day We Put The Dog Down’ is incredibly relatable, ‘Antidote’ steals a sex pistols riff with style, while ‘Mark Knopfler Is My Moral Compass’ not only boasts a great title, but also a killer hook. Throw in tracks like the riff-heavy killer Jeremy’s Last Stand’ and the excellent songwriting of ‘Babylon Is for Lovers’, which exemplifies their accessible depth and this is frankly a fucking brilliant record that is not to be missed. (EL)

‘In the Parlance of Our Times’ by Russian Girlfriends is out now on A-F Records. 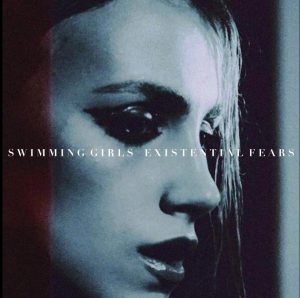 Following two years of consistently great singles, and frequent performances in both intimate settings and major support slots for Pale Waves, Fickle Friends and Catholic Action, Bristol’s Swimming Girls are finally starting to climb the ladder to become one of the biggest guitar pop bands in the business, with upcoming performances at Glastonbury and Reading & Leeds to showcase their immersive and deeply emotional pop rock to the biggest audiences of their career. Of course, it would be wholly cynical to only praise the band on their industry merits. From day one, their music has been an overwhelming cocktail of shoegaze-y textured synthpop both triumphant and heartbreaking in Vanessa Giménez’s memoir-esque lyrics and shimmering musical backdrop.

On four-track EP ‘Existential Fears’, Swimming Girls double down on their emotive songwriting, boasting cleaner production and soaring pop hooks. Opener ‘1 2 Many’ springs to life immediately with head-rushing buoyancy, while Giménez’s scene-setting of ‘Waking up at your door…’ with ‘20 missed calls’ paints a distressed aftermath of chaotic events. The other half of ‘Existential Fears’ keeps itself in more mellow territory.

Fans of BMTH’s continued pop experimentation on ‘amo’ will find comfort in the gloomy electronica of ‘Holy Place’ while ‘Pray for Silence’ ends the EP on a sombre note with a lone guitar and piano instrumental backdrop as Giménez seeks the embrace of a higher power she doesn’t believe in. It’s a bold showcasing of someone at their weakest that demands 100% of your attention. In a just world, Swimming Girls would be a household name at this point, but on the strength of this EP, that dream might just become a reality sooner rather than later. (AD)

‘Existential Fears’ by Swimming Girls is out now on Yucatan Records. 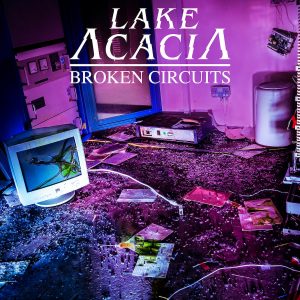 ‘Broken Circuits’ is the second EP from Oxford’s promising alt-rock trio, Lake Acacia; an upcoming band that have been working hard to establish a strong local following. Their brand of alt-rock is more mature than your average offering, as they have a heavier feel that is offset by three-part vocal harmonies. They also aren’t afraid to drop in some atmospheric touches, beside dipping their toes into other musical pools to throw in the occasional surprise.

The deceptively atmospheric lead-in to ‘Runaway’ soon drifts into a slow-burner with classy vocal interplay that patiently builds to a closing section with a seriously heavy groove; this is obviously a group that think about their sound as they step outside the usual confines of British alt-rock.

‘Any Day Now’ follows in more frantic style, but once again the vocals are top-drawer and they throw in some nice switch-ups to vary the pace. ‘Desynthed’, is about regaining control in a synthesized reality and is a little more meat and potatoes rock, until the moody midsection with its prog rock feel. The EP closes with ‘Time to Change’, its familiar sounding angular melody again demonstrating their songwriting maturity. Nice work. (EL)

‘Broken Circuits’ EP by Lake Acacia is out now. 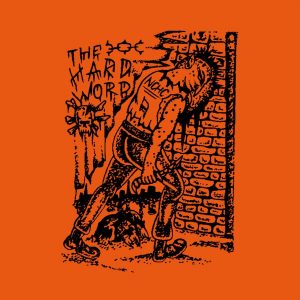 Think Sick Of It All’s ‘Blood, Sweat and No Tears’ on meth and you’ve got an idea of the unhinged forcefulness The Hard Word is going for on their self-titled EP. At seven minutes and 28 seconds long, this is a brief encounter, but one that will make fans of the punkier end of a hardcore windmill with joy.

With its scrappy production and tooth-and-nail songwriting, the Newcastle, Australia, six-piece pride themselves on their feral nature and imposing lyricism based on the misery of everyday living. (“It’s a broken world, and it might break you too, there’s a special place in this Hell that’s been set aside for you”). Tracks like ‘Output’ and ‘Hostage’ are releases of high-pace punk adrenaline created purely as catharsis for pure frustration turned into blood-rushing tirades of youthful energy. ‘The Hard Word’ is such an instant headrush, it’s not easy to comprehend the power of the rollicking musical force that’s entered your ears like a bullet to the head. But it’s not really meant to be understood or carry a deeper meaning. The Hard Word exemplify the values of working-class punk rock, tipping its hat to the genre’s founders while keeping the sound recharged and crushing. (AD) 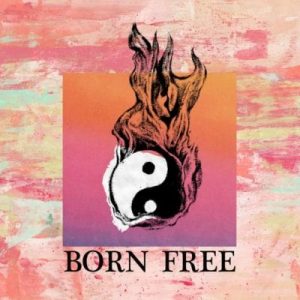 Since 2013, Born Free have been kicking it on Melbourne’s hardcore scene, setting venues alight and providing ample support for the likes of Comeback Kid, Harm’s Way and Turnstile. And it’s easy to see the appeal of having a band with this much firepower by your side as they’ve demonstrated with the fullest of their powers on their self-titled venture. This is a record that trims all the fat of scene setting atmosphere and any unnecessary padding that keeps the kids away from the pits.

Opening the album with ‘Blinded’, listeners are immediately confronted by fat slabs of groovy riffs interspersed by spontaneous drum bursts and two-step rhythms. Think of the irresistible swagger of Trapped Under Ice and the random bursts of Slayer-esque pace and you’ve got an idea of Born Free’s big riff manifesto on tracks like ‘Burn’ and ‘Wasted’.

Some may consider Born Free’s no-frills hardcore to be one-dimensional and derivative of a legendary roster of artists who have paved the way for them, but what you hear on this self-titled record is a band who know themselves and their sound and carry it off with enough self-assurance and confidence to create the tightest record they possibly can. And the fruit of their labour is surely rewarded in the strength of these tracks and how hard fans are going to throw down at shows with every new riff dropped into each set. (AD)

‘Born Free’ by Born Free is out now on Resist Records.

Salt Lake City quartet A Traitor’s Last Breath are part of a new breed of deathcore groups who have crept into the heavy music landscape unnoticed. Years of influence from the likes of Whitechapel, Thy Art is Murder and Aversions Crown have cultivated a yearning for merging the most irresistible hooks with the heaviest bass drops and most frantic collection of blast beats and panic chord terror. And on their debut album ‘Adversaries’, ATLB bring these ingredients together to make a petrol bomb of massively-destructive properties.

Less a collection of songs and more a continuous tapestry of decay and devastation, ‘Adversaries’ constantly builds upon the heaviness and intensity of each track by aiming to make each riff heavier and each musical section more flourishing than the one before. Towering arrangements of blast beats and ascending guitar leads build upon the album’s title track into a brief section of lead guitar harmonies before exploding into colossal breakdowns, like witnessing grey clouds from a distance before they open to bring a rain of locusts upon unsuspecting city-dwellers.

Admittedly, A Traitor’s Last Breath are no gateway band when it comes to deathcore, and getting through this album in one sitting is a big ask, like watching all three Human Centipede films in one go would be, but the cataclysmic songwriting of this album is awe-inspiring and will leave you in a constant state of shock and disarray, something any good deathcore record should be capable of. All hail the new generation. (AD)

‘Adversaries’ by A Traitor’s Last Breath is out now. 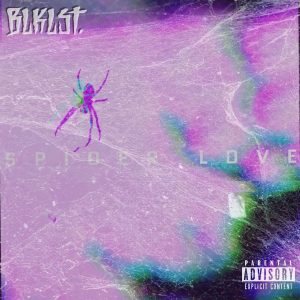 Hot on the heels of last year’s ‘Hard to Swallow’ EP, self-styled nu-metalcore outfit BLKLST from Melbourne, Australia, recently dropped their latest offering, ‘Spider Love’. The EP packs in six hard-hitting tracks of their aggressive, nineties-influenced blend of heavy alternative rock and metalcore, giving them a distinctly hard-edged energy that translates into songs with a definite impact and an underlying air of familiarity.

‘Blk.FM’ explodes into life with an attacking guttural vocal in its minute and a half of banging metalcore, before ‘Something Inside Me’ takes a more sinister, slow-boiling approach; the cleaner vocal in the chorus with plenty of echoes of the mid-nineties. Their metalcore-leaning approach makes for an interesting blend with the nu-metal, industrial, alt-rock influence bubbling away beneath the surface; ‘They All Look The Same’ making for a particularly banging stylistic melting pot. ‘Let Go’ follows in atmospherically dark ballad mode, the anguish-filled rapped vocal adding yet another dimension.

The title track has a definite Nine Inch Nails feel to it, which also echoes melodically in the heavyweight closer ‘Shut Off’, although their eclectic approach keeps the overall heavy vibe. All in all, ‘Spider Love’ makes for a pretty vibrant listen with an interesting approach style-wise, so if you fancy something with a fresh approach, it’s well worth a listen. (EL)

‘Spider Love’ EP by BLKLST is out now.