Under the Radar: February 2019

For this month’s edition of Under The Radar, we look at new releases from Boundaries, Judiciary, Semaphore, Climate of Fear, Bridal Shower, Quantum Pig and VFLambda. 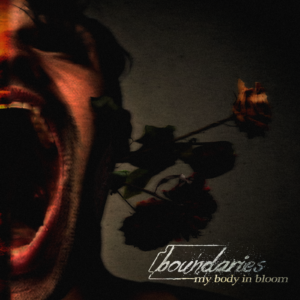 Boundaries – My Body In Bloom EP

Connecticut quintet Boundaries play the kind of music designed to soundtrack a good hard beating where some poor unfortunate gets all seven shades smacked out of him. To describe their sound as bruising doesn’t quite do justice to the absolute pummelling on offer on their latest EP, ‘My Body in Bloom’, as they take the principles of hardcore beyond a metal extreme on what has been aptly described as sonic punishment. This record will make you want to break things.

‘Kill Me Patiently’ sets the tone with monstrous riffing and rabid vocals; it sounds like a machine gun picking off stragglers and leaving a trail of corpses, before reaching a slightly disjointed close that flows into the beatdown of the paradoxically titled ‘Blush’. Once again it’s angry as hell, like hardcore turned up to eleven, its slower boil continuing into the angular riff play of ‘Hesitation Wounds’. It’s so easy to imagine a violent circle pit rocking out to this. Despite the atmospheric opening to the title track, they then let it all rip as they switch up the riffs between frantic fury and a more precise approach. There’s another dose of terror on the equally pummelling ‘Pain Medicine‘ before ‘Crxss My Heart’ goes disturbingly psychotic to close out this superbly heavy smackdown. Killer. (EL)

‘My Body in Bloom’ by Boundaries is out now on Unbeaten Records. 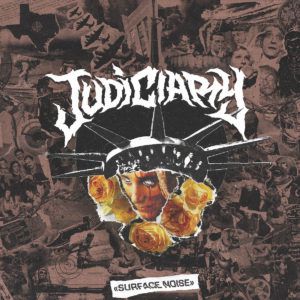 ‘Surface Noise’ is the debut full-length from West-Texas quintet Judiciary, and while it lasts only 26 minutes, it leaves a dizzying impact on listeners who’ll be left begging for more concrete riffs. As the world of beatdown hardcore continues to make its presence known in the mainstream metal community, Judiciary have gained a rabid following through Code Orange and Homewrecker support slots, and it’s clear that ‘Surface Noise’ is the product of a group of friends who love dabbling in both styles to make their own pummelling creation.

‘Social Crusade’ instantly puts the album into ignition with pile driving melodies which plough forward with a consistent level of density and groove throughout the record’s war-charge. Pairing this momentum with sweep-picking lead effects, reminiscent of the gnarliest moments of home-state heroes Pantera’s back catalogue on ‘Karma’s Knife’, the pro musicianship adds to their excellence beyond sheer brutality. It may be under half an hour, but once you’ve reached your seventh listen in a row and still find yourself windmilling to ‘Burden of Truth’, you’ll find yourself asking where the time went. (AD)

‘Surface Noise’ by Judiciary is out now on Closed Casket Activities. 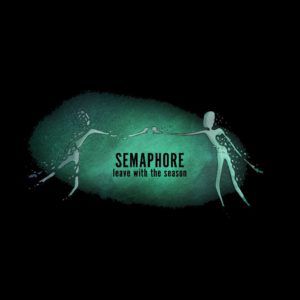 Semaphore – Leave With The Season EP

‘Semaphore’ are an eclectic quartet from Brooklyn, NY who make a pretty damn enjoyable racket. It is all a bit genre-defying, with grunge touches, a hint of shoe-gaze and even a lick of jazz guitar here and there. The sum is greater than the parts though, and on ‘Leave With The Season’ they have put together a cool bunch of songs to follow up 2017’s full length platter ‘All Too Robot’. It’s experimental, it’s got hooks, they know how to crank it up and the whole thing makes for a hell of a cool record.

‘Unreliable’ kicks off with a math-tinged indie rocker with an earworm hook to reel you in, but then ‘Converge’ follows with a slow-boiling, grungy shoe-gaze feel, shifting neatly between loud-quiet-loud in likeably abrasive style, featuring a histrionic instrumental paisage. ‘Pie’, is then atmospherically chilled until it fires up a hypnotic guitar riff that segues into the rolling rhythms of the title track with its heavy guitar parts and grungy vocals. Besides the bonus acoustic version of the opening track, we also get the spiky ‘Didn’t You Dream’, which is as classy a slice of American college-radio rock as you are like to hear. Great little record – well worth checking out. (EL)

‘Leave With The Seasons EP’ by Semaphore is out now. 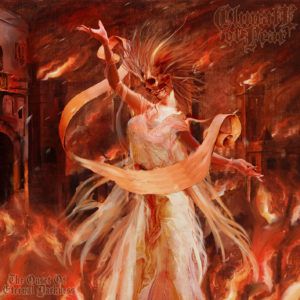 Climate of Fear – The Onset Of Eternal Darkness

It’s hard to believe nobody thought of calling their band Climate of Fear before now, it’s such an obviously cool name, like it came straight out of the late eighties death metal scene. In fact, stylistically speaking there is quite a throwback feel to CoF, though they do sound fresh and current despite their classically heavy chord progressions. With plenty to say about the ills of modern capitalism and a surprisingly accessible, albeit pummelling, sound, ‘The Onset of Eternal Darkness’ is satisfyingly heavy, with a nice slice of complementary atmospherics and intricate instrumentation to add depth. In fact, each listen reveals a little more to the record, making it worth investing a little time to get to know it better.

Opener ‘Rapture’ teases a sombre piano melody before the massive riff kicks in to signal the oncoming fury, and before you know it we have galloping drums, thrashy riffs and vocals from the lungs of hell. Featuring members of Cold Hard Truth, World Truth and Desolated, CoF are not exactly new to the game, which is easy to see from the quality of their songwriting. ‘Cult of Retribution’, for instance, has some quality time changes and classy switch-ups to the riffs, ‘Storming the Heavens’ practically rains hellfire while chopping back and forth frenetically and the more measured instrumental, ‘De Conflictu Noctis Aeternae Obruat’, is excellently executed. With other killer numbers like the furious ‘Slaves of Capital’ and the pure mosh fodder of ‘From Enslavement to Extinction’ this is a seriously classy debut, so if you like your metal with a heavy touch of incisive fury this deserves a few spins.

‘The Onset Of Eternal Darkness’ by Climate of Fear is out now on Demons Run Amok. 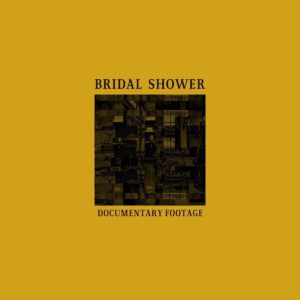 Opener ‘Sandstone Dreams’ sets the gloomy tone of the EP as frontman Lewis Glass reflects on his own isolation and social awkwardness – “Please let me hide, staring out, a reflection, a reminder of your social stance”. The Glasgow quartet play with a tender fragility over steady drum beats and the delicate jangle of late-80s indie guitar leads, but there’s a looming darkness that sits in the background of the song that never really rears it’s ugly head, only becoming more evident as the song continues. That unsettling atmosphere lingers in the background throughout ‘Documentary Footage’ and it’s a prominent aspect of Bridal Shower’s gripping songwriting prowess. Even during ‘Blueberry’s’ headstrong emo chord progression, a la Balance and Composure, Glass’s monochromatic baritone is a source of worry and distress, switching from serene to chaotic at a moment’s notice. Harrowing and unpredictable, ‘Documentary Footage’ is the manifestation of love and hate that takes no prisoners. (AD)

‘Documentary Footage’ by Bridal Shower is out now on Common Records. 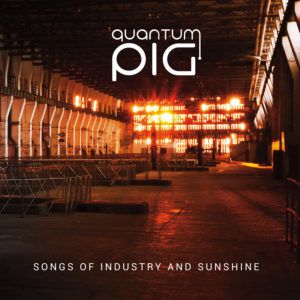 London duo Quantum Pig make progressive music in the sense that they have a clear message relating to the need for human progress, tucked neatly into progressive-style rock. Yet despite the pristine production, soaring guitars and virtuosic instrumentalism of Ian Faragher, their sense of melody and arrangement is tempered with punky guitars and an eclectic array of stylistic touches of horns and electronica. The band’s calling card though is the lyrical depth of Mark Stevenson’s criticism of the outdated capitalist model as they call out for a more inclusive future, the seven tracks on offer being lyricly incisive and progressively experimental without being indulgently overboard.

Opening track ‘Statement of Intent’, for instance, is a slow-boiling critique of the modern world; lines like “Is this the sum total of all that we dreamt?” acting as a call for alternative energy to replace the outdated, resource consuming industrial model of today. We get a punkier attack on the punchy ‘Citizen and State’ and ‘Things’, while there is a more traditionally progressive feel to the meandering experimentalism of ‘Long Letter Home’, all twelve minutes of it! However, it is ‘Keep The Nation Warm’ where they best exploit their prog-rock tendencies while still nailing a good tune. So, if you like something that’ll make you think about the modern world, this is a worthwhile listen. (EL) 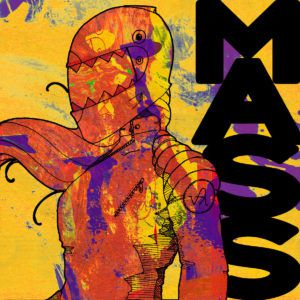 VFLambda (v = fλ) is the scientific formula used to calculate the speed of waves in any body of water, in which the length between each wave is equal to how fast it’s moving. If that is the case, then ‘Mass’, by Dundonian quartet VFLambda, moves in pretty caustic waters, as there’s little to no prediction on how these waves will settle throughout the five track EP. Fans of The Twilight Sad’s distressing noise affair ‘Forget The Night Ahead’ will find plenty of moments of pummelling walls of distortion to gloomily immerse in.

Beyond their craft of wallowing soundscapes and muggy produced slabs of dense sludge, ‘Mass’ is packed with catchy riffs and soaring melodies that come from hefty doses of stoner rock worship, a la Earthless or Causa Sui. What really keeps listeners on edge though, is the overall melodrama that glues the songs together, from the sleek meandering of ‘Natasha’ to the frantic funk metal that bursts into life on ‘Night Driving, No Skiving.’ Furthermore, frontman Johnny Threshold’s dark humour is a constant source of shock within the lyrics – “The world is a cigarette, and I’m dying of cancer.” No matter what track you pick, VFLambda constantly serve up spontaneous bursts of cathartic cacophony that picks up any ease you once had and sweeps it into the depths of the ocean. So keep yourself dry, because ‘Mass’ is an investigation of the wavelength of some of the choppiest waters around. (AD)

‘Mass’ by VFLambda is out now.