For this month’s edition of Under The Radar, we look at recent releases LINGUA IGNOTA, Wizard Rifle, The Survival Code, The Vanities, Glitterer, Sanction, and The Cruel Knives. 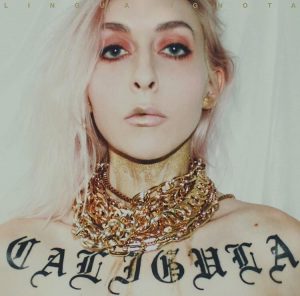 Like a splatter of mud to the face at an elegant dinner party, LINGUA IGNOTA‘s ‘CALIGULA’ is constantly at odds with it’s ideas to disorienting effect, and that sense of tension and thrill is exactly what you get, even if the simple string quartet that welcomes you to the record on ‘FAITHFUL SERVANT OF CHRIST’ suggests otherwise.

For Ignota, CALIGULA is an outlet for pure frustration, fear and loneliness in it’s most depraved form. Delivering unexpected lashings of blood-curdling screams on ‘DO YOU DOUBT ME TRAITOR’, she turns the ‘fragile and vulnerable’ element depicted at the song’s beginning into haunting territory as piano chords become fully atonal and the inclusion of clattering drum effects add a chaotic soundscape. Quickly her role as songwriter turns from victim to commander-in-chief, her piercing vocals grabbing listeners by the throat and staring them right in their face as she holds them in her vocal vice grip. Production and atmosphere is a key element of CALIGULA’s unease. ‘Fragrant Is My Many Flower’d Crown’ opens with grotesquely manipulated vocal harmonies on it’s ‘God alone knows my sorrow’ refrains. LINGUA IGNOTA knows they’re grotesque which is why it so openly embraced on this album, because for all the graceful musical backdrops this may have, CALIGULA is an ugly album at heart. (AD)

‘CALIGULA’ by LINGUA IGNOTA is out now on Profound Lore. 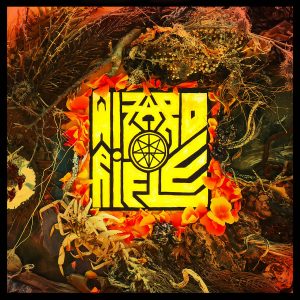 Wizard Rifle are an impressively loud duo from Portland, Oregon, whose self-titled third album, their first in five years, is about to hit the racks. Boasting a reverb-heavy guitar grind, the experienced two-piece seem to enjoy immersing themselves in hypnotically psychedelic swathes of dirty metal; the five tracks on offer here weighing in at a hefty 45 minutes! Their somewhat discordant approach sees them attack the songs from different directions as the rhythms and riffs are often at odds, until meeting in unison to kick the intensity up a notch. It makes for a challenging listen but is damn good fun.

‘Rocket to Hell’ opens pretty frantically, the drums and guitars seemingly battling one another in a cacophony of noise. There is a likeable head-shaking energy though, and as they slowly turn the screw before and after the mid-section, the intensity is infectious. ‘Caveman Waltz’ is more accessible, offering a little more groove that could easily set a sweaty pit into a hypnotic swirl before descending into hardcore fury and head-fucking confusion. Beneath the Spider maintains the intensity as they wax lyrical on the state of the environment to a strangely Celtic guitar melody before journeying through various degrees of discord. It’s followed by the 12-minute ‘Funeral of the Sun’ which goes through just about everything they have to offer in terms of dark and light and fast and slow; it’s basically an album in itself. There is still nine more minutes to come with the thrashy riffs and psychedelic vocals of the punchy ‘V’ to finish strongly. Good record – intense. (EL) 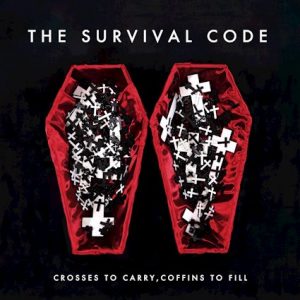 The Survival Code – Crosses to Carry, Coffins to Fill EP

Another energetic duo that have been kicking around a while are ‘The Survival Code’, whose latest EP, ‘Crosses to Carry, Coffins to Fill’ follows last year’s sophomore album, ‘Hopelessness Of People’ with five tracks of punchy rock. They have a straightforward approach, focused on delivering four-minute slices of well-delivered, melodic rock that gets into your brain. Once again, they make plenty of noise for a two-piece and they capture the live energy on their latest release, the first to feature new drummer Simon Hartop alongside founder Gary McGuinness.

‘The Innocent’ opens to a chugging pop-punk riff and works through a likeable melody-friendly tune with a slightly emotive edge. It’s easy on the ear and effortlessly works the hooks before ‘Something Beautiful’ turns the intensity up a notch with a dark, driving rocker that also exploits the classy sense of timing they so subtly employ in the half stops and downturns; its measured closing section adding a touch of drama. ‘So Serious’ offers a little more groove, while ‘Cycles’ sits firmly in the pop-punk sound of the opener. They aren’t exactly challenging the conventions of songwriting, but it’s nonetheless enjoyable and on closer ‘Magnets’ they stretch their wings a little wider. There’s a darker influence at play between the lines and the epic ballad feel works well. Although the songs are a little formulaic, the overall effect is pretty pleasing – well worth a listen. (EL)

‘Crosses to Carry, Coffins to Fill’ EP by The Survival Code is out now on Good Deeds Music. 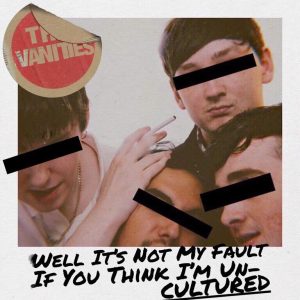 Its opening track may have a chord progression that’s dangerously similar to McFly’s ‘Five Colours In Her Hair’ at points, but there’s a fire roaring in the chests of Glasgow four-piece The Vanities that you just won’t find in any major label pop-rock band. Having torn up the Scottish punk circuit alongside the likes of Heavy Rapids, Baby Strange and Gallus, the adrenaline rush is easily captured on four-track EP, ‘Well It’s Not My Fault If You Think I’m Uncultured’.

With themes of staying up all night drinking, running in with violent gangs and getting into fights in grotty pubs and ‘spending all your money on the puggy machine’ The Vanities parade their everyday recklessness with the bravado of a Weegie Motley Crue with the bare-bones instrumentation that recalls the simplicity of early Libertines releases on ‘Gang Culture’, before ramping up the pace for the rapid fire skate punk of ‘Scumbag’, then calming things down on ska-infused closer ‘Smash N’ Grab’. As Glasgow continues to reveal itself as the UK’s new capital of punk, The Vanities are a band who are unafraid to wear their influences on their sleeves, swaying from massive pop hooks to circle-pit inducing punk compositions. At four tracks, ‘Well It’s Not my Fault…’ is a powder keg of total energy, but it also shows The Vanities have enough ideas to carry that momentum into a full album. Soon, everybody will want to know their name. (AD)

‘Well It’s Not My Fault If You Think I’m Uncultured’ by The Vanities is out now. 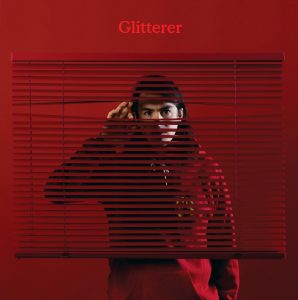 Glitterer – Looking Through the Shades

“I wish I could be someone else from time to time”, Title Fight’s Ned Russin muses on ‘The Race’, the opening track of his debut full-length under his solo alter-ego Glitterer. Self-composed and recorded with close friends and family, this album is a chance for Russin to briefly showcase the prettier aspects of his songwriting.

With the lavish grandeur and self-obsessed melodrama of a 1980s high school prom, lead single ‘Destiny’ is a velvet cocktail of string sections, lo-fi guitar fuzz a la Dinosaur Jr., and brooding lyrics with an underlying sinisterness (“I’m not to blame, I’m innocent, as long as I’m the one pulling the strings”)’. Embracing the less-is-more approach to the point where ‘The News’ is a single vocal and bass track, Russin leaves a huge impact in the 21 minutes he has to fill out the album. With warm and fuzzy guitar tones, and charming melodies throughout, ‘Looking Through the Shades’ takes feelings of isolation and melancholy but uses it to create a musical fortress, where anxieties briefly halt. Self-loathing has rarely sounded so charming. (AD)

‘Looking Through the Shades’ by Glitterer is out now on ANTI- Records. 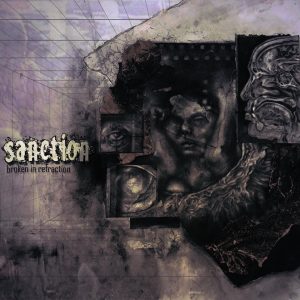 Armed to the teeth with a collection of dissonant hardcore riffs and a penchant for working bleak waking-up-gagged-in-a-stranger’s-basement-esque atmosphere into their music, Long Island’s Sanction are following in the footsteps of their contemporaries in Vein and Jesus Piece as a metalcore band who are more satisfying introducing elements of abstraction and fear into a world where everyone wants a rousing anthem to sing along to.

Debut full-length ‘Broken In Refraction’ carries many of the similar elements that made their 2018 EP ‘The Infringement of God’s Plan’ such a hyped up release in the metalcore underground. The pots-and-pans kick-snare sound emphasises the rawness of breakdowns in ‘Paralysis’ and ‘Mirror Syndrome’ and vocalist David Andrew’s unflinching razor-sharp growl keeps the record constantly on edge, often preceding massive breakdowns to enhance their rage-laden catharsis. While tours with the likes of Stick To Your Guns, Emmure and Knocked Loose has no doubt introduced Sanction to a wider fanbase, the tracks on ‘Broken In Refraction’ sound like they were made for the dingiest of venues with grey concrete floors and broken teeth littering them. You can consider it an alternative to a genre that lost itself in a world of commercial saturation, but really, Sanction are just putting a grim new spin on metalcore and having the time of their lives doing so. (AD)

‘Broken In Refraction’ by Sanction is out now on Pure Noise Records. 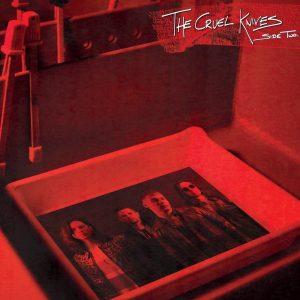 The Cruel Knives – Side Two EP

It’s been two years since British rockers The Cruel Knives dropped their debut EP ‘Side One’, which was as classy a slice of modern hard rock as you are like to hear. Now, the quartet have finally got round to the follow up and <i)’Side Two’ does not disappoint, delivering a groove-filled selection of swaggering hard rock fist pumpers, which despite being straight forward have a confident poise that really hits the spot.

A searing riff opens ‘Black Eye Friday’, which soon builds into an uptempo slice of fresh sounding hard rock with a classy vocal on the killer hook from Tom Harris. ‘Hollow People’ boils a little slower, but again they nail the hook and it’s instantly likeable. They may be walking a well-trodden path, but they are swaggering down it with all guns blazing as they deliver a punchy selection of assured rockers. Whether it’s the searing guitars to ‘If This Is The End’, the pounding ‘Blood in The Water’ or the downright dirty riffs to ‘On a Leash’ they have a certain panache that carries it all off in style. Sure, they’ve swallowed the hard rock playbook, but with such excellent vocals and the tight musicianship it rocks and it’s great fun. What’s not to like! (EL)

‘Side Two’ EP by The Cruel Knives is out now.