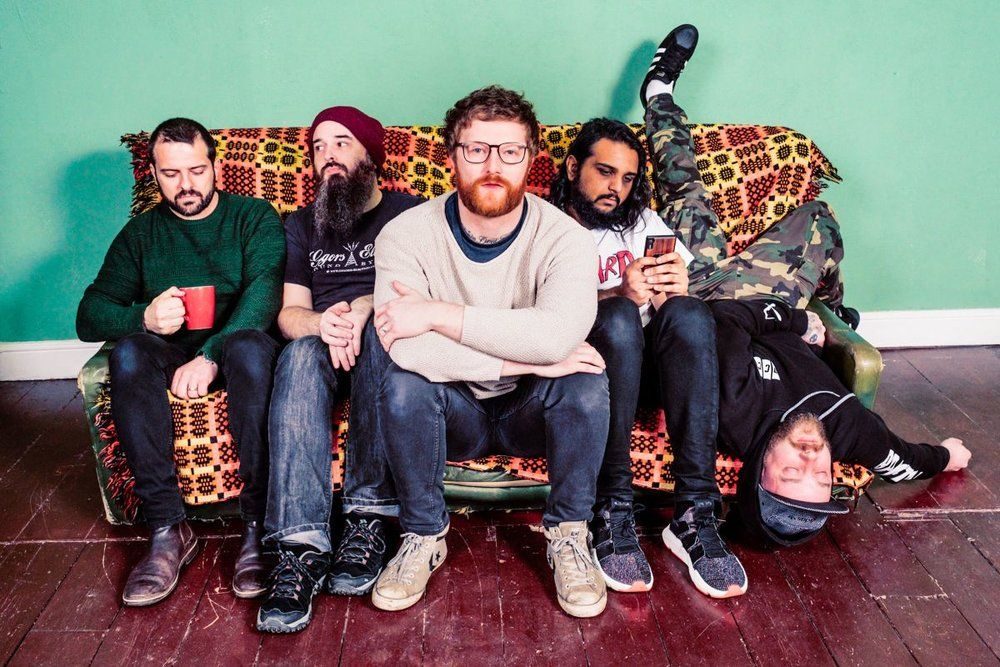 “The aim isn’t for us to make money. I just want the opportunity to work hard and afford the experiences that I currently don’t have.”

“It’s romantic in the sense that it’s not romantic at all. There’s a carrot on a string that you can’t reach,” states vocalist Damien Sayell on ‘Remystery,’ the second song on ‘Caprice Enchanté,’ the recently released second album from Sayell’s band, The St Pierre Snake Invasion. The line is just one of many examples that sum up the self-analytical approach Damien took whilst writing the record.

It may be a cliché, but the making of ‘Caprice Enchanté’ epitomises the term “difficult second album.” Four years in the making, the album suffered various setbacks; Sayell blew out his voice on the first day, and producer Sean Genockey proved to be in demand due to working with Shame and Roger Daltrey. While bassist Dave Larkin would depart to join Black Peaks halfway through its making. Nevertheless, at the centre of it was Sayell evolving lyrical approach to the album.

“It was initially about romanticism. It was me, reflecting on being a teenager, learning to play the guitar and thinking about when I’m 30, I’ll be world-famous, I’ll have my own record company and all that kind of stuff,” explains Damien shortly before making their fifth appearance at the 2000trees Festival. Reflecting on his teenager dreams brought a harsh dose of reality. He continues, “when I was 30, I had none of that. I was nowhere near that. I couldn’t be further from it if I tried to. Over two years, it morphed from what was meant to be this playful thing to ‘you’ve got some growing up to do’.”

On the surface, ‘Caprice Enchanté’ is an intense cocktail of noise-rock, thrash, hardcore with twists and turns aplenty. Yet it’s Sayell’s introspective lyrics that simmer beneath, adding intrigue to the 13 songs on offer. It sees him facing up to the goals he had set himself, the entitlement they bought and the failure to fulfil them. Ultimately, it led Damien to question his identity.

Although the album takes a somewhat downbeat, introspective look at Sayell’s apparent failures, it’s countered by his ability to recognise his flaws. “It’s not an emo album or anything like that. I’m not singing about my pain. It’s not ‘woe is me’,” states Damien. “It’s me going ‘there are things about me that I quite like, and there are things about me that other people like, and that makes me feel good'”.

Paired with his inability to succeed, is a hint of bitterness fuelled by the lack of acknowledgement of The St Pierre Snake Invasion‘s first album, ‘A Hundred Years a Day’ got. In contrast, their second album has been well-received since its release in June, although the response hasn’t entirely changed Sayell’s feelings on the music industry. “I always thought it [the music industry] was a bag of festering shit, even from a young age. I knew that if I ever had the chance to be inside of it, that I wouldn’t get along with it,” explains Damien. “Then with St Pierre, the bigger we’ve got and the more interactions we’ve had with people within the industry, those thoughts have been realised.”

Having recognised his mistakes, along with the delays ‘Caprice Enchanté’ faced, Sayell and his bandmates now have the attention they’ve yearned for. Although a sub-headline slot on 2000trees’ Cave stage isn’t entirely a sign of the acclaim TSPSI have received.

“I assumed the reception to the album was really good, and it wasn’t. It was because [the] Black Queen dropped out and then James Scarlett [2000Trees organiser] thought ‘which band is dumb enough to play that slot without asking for more money?’ and he thought of us. We told him the first time we played ArcTanGent, we said to him ‘no matter how big we get, we’ll do it for £150 or whatever, a minimal fee,’ just because we love doing it.”

Admittedly, festivals such as 2000trees and ArcTanGent have allowed a DIY band like TSPSI to find and grow a fanbase. “We see friends we don’t see for a long time. We see fans of the band that we’re friendly with now, so it’s more of a get-together. It’s more like a family BBQ,” Damien says when asked about the attraction of repeatedly coming to 2000trees.

Despite the considerable sudden wave of attention St Pierre have earned, Damien is well aware that the hard work the band have put in could soon disappear. “It feels like we’re a proper band now. I hope it continues, not in a sense we get huge, I just hope it’s not three months and then no one is talking about it. I really want to milk every little bit of experience out of this as I can,” he explains when questioned about the reaction to ‘Caprice Enchanté’.

Due to their DIY origins and the lack of recognition that clouded the band’s early years, you get a sense of gratitude from Damien when discussing the potential opportunities to sustain their current recognition. “All I want is the opportunity is to work hard at this. The aim isn’t for us to make money. I just want the opportunity to work hard and afford the experiences that I currently don’t have.

“I want to go to a different country and see a room full of people I’ve never met, sing my words at me, more than us getting paid more than £5,000 to go out there and do it. Just a bit of validation.”

Conceivably, that acceptance has been declared with ‘Caprice Enchanté‘s response. Yet with an Autumn run of UK shows alongside Cassels pencilled in, The St Pierre Snake Invasion are making strides to maintain a productive summer. With a manager now on board, Sayell and company can start mapping out plans to further their recognition, and as you can imagine, the frontman is looking to fulfil his hunger for new opportunities. “Hopefully we get some tour supports with some bigger bands, some festivals in Europe and hopefully some bigger festivals here as well. Any opportunities we have, just take it and see what happens.”

‘Caprice Enchanté’ by The St. Pierre Snake Invasion is out now.

The St. Pierre Snake Invasion will be touring with Cassels on the following dates: