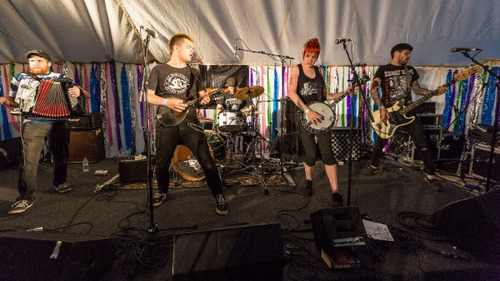 Folk punks The Roughneck Riot have been busy recording the follow up to debut album ‘This Is Our Day’ at Jaraf House Studios in Wigan.

Despite line up changes, the band have pushed on recording the new record, which they plan to release later this year. The sextet also have planned to hit the road until the end of 2014.

Vocalist/Mandolinist Matty Humphries had this to say:
“The past 2 years have been quite ridiculous in the UK. We’ve been mostly writing when something has made us angry. There’s a disgusting amount of fascism and racism in the UK and Europe. Some more personal tales of our own lives and Sam (accordion player) has even rewritten an old song about Fox Hunting to be a tribute to the Hunt Saboteurs of the UK.”

The Roughneck Riot will be playing the following UK shows: