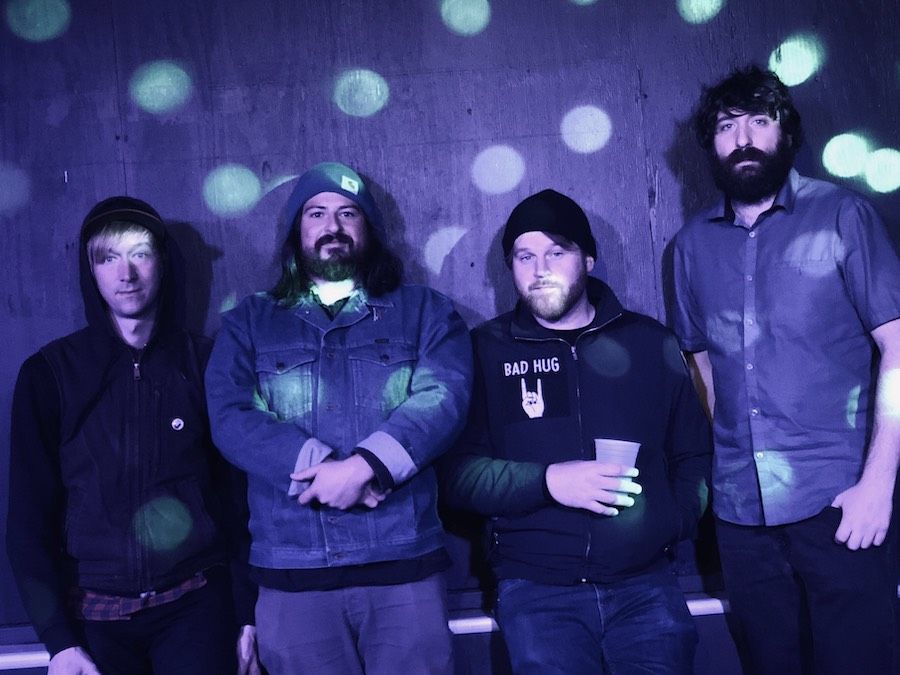 Dead Bars consider themselves as “punk lifers” and it’s easy to see why. East Coast natives John Maiello and C.J. Frederick got together in 2013 after meeting in a bar in Seattle, Washington. From there, the pair along with a rotating lineup of members put in the groundwork to solidify a brand of fist-in-the-air punk rock.

Their latest record, ‘Regulars’, is full of heartfelt and passionate songs, with a subtle focus on coherent songwriting and a big emphasis on beer-soaked hooks. Although there’s a raw, punk grittiness throughout, songs such as ‘No Tattoos‘ and ‘I Need You’ charm you with relatable lyrics and simple melodies that you helplessly keep coming back to.

These days, Maiello, Frederick, along with now permanent members, Jon Oddo and Elliot Thordarson, call Seattle home. Yet for vocalist John Maiello, he still considers the brilliantly named town of Rockaway in New Jersey his home and the place that put him on the road to living the punk rock life. The area is considered a borough of Morris County and has a population of less than 7,000.

Nevertheless, as John tells us, it was the state of New Jersey that made a profound impact growing up. As part of our ‘The Place We Call Home’ series, Maiello told us about the band’s that broke out of the area, its unsung heroes, the venues he regularly attended and more.

John: I live in Seattle. Dead Bars started here. You’ve all heard about the rain, and coffee, and grunge (and Nirvana, Fleet Foxes, Macklemore and Tacocat, and all the other popular bands and artists from here). It’s awesome here. The bands here rock.

But if we want to talk about my influences and how it all comes together, we’ve got to go back to the beginning. I’m from a small town in New Jersey called Rockaway. Not to be confused with Rock Rock, Rockaway Beach in New York. There would be no Dead Bars if I didn’t grow up in the punk scene back in New Jersey.

John: The WWE wrestler Doink the Clown (Editor sidenote: “which one?”) lives there, but Rockaway is probably most famous for having a shopping mall. Lots of people from all over New Jersey, Pennsylvania, and even New York shop at the Rockaway Mall. The town’s history goes all the way back to the Revolutionary War, though. Rockaway was a huge mining town in the 1700s and 1800s, and it was a big source of iron ore used in weaponry for the American military during the revolution.

John: New Jersey is filled with so many small towns, so I’m not sure that my hometown itself had any special influence on the music scene, but just being a kid in the suburbs of New Jersey, there was definitely something uniquely Jersey that comes out in the music. Rockaway is 30 miles outside of NYC, but it couldn’t have felt farther away, at least for me. We weren’t New York at all. We were so Jersey, and that was our sound.

John: Definitely in the 90s, it was pop-punk. Probably hardcore and metal too. For a while in the 2000s, the most popular bands in the world were coming out of the same scene I was in: Thursday, My Chemical Romance, The Gaslight Anthem. Nowadays, I have no idea. Hopefully something cool!

John: The most well-known band from Rockaway, NJ has got to be The Dillinger Escape Plan. They practised at a rehearsal space in Rockaway for years. In 2007, a guy I went to high school with ended up buying the rehearsal space to convert half of it into a recording studio, while still keeping the practice rooms. Dillinger kept practising there, and then started recording there, and eventually, they asked my friend to join The Dillinger Escape plan as their 2nd guitarist. As much as I love Dillinger, they were already very established by the time I got into playing music.

For me, a band that I’m super proud of that came out of Rockaway during the same time I was coming up was a band called Houston Calls. They were a Drive-Thru Records band, and they got to put out records and tour the world. I was always looked up to them.

John: Folly and Khantra. Both amazing bands that informed my musical taste for years to come.

John: There were places like Bloomfield Ave. Café and Hamilton St. Café and of course all the legion hall and church shows. The first time I entered mosh pit or jumped off a stage was at these spots. Going to these shows made me want to be in a band.

John: We’ve probably played this place in Jersey City, NJ called the Pet Shop the most. It’s a small bar. Just recently though, we played down the street from there at White Eagle Hall with The Bouncing Souls. We went from a tiny place to an 800 capacity sold out show opening for one of my favourite bands. Next time, we’ll probably go back to the Pet Shop. We will play wherever anyone will have us, big or small.

John: I think the song ‘Timecop’ by Iron Chic pretty much sums up what it was like to be where I’m from. “Remember when time was all we had? No care for the sand in the hourglass. Each new night was another shot to stake our claim on a parking lot.” That’s what it was like to grow up in Rockaway, NJ

‘Regulars’ by Dead Bars is out now on A-F Records (USA)/All In Vinyl (UK).