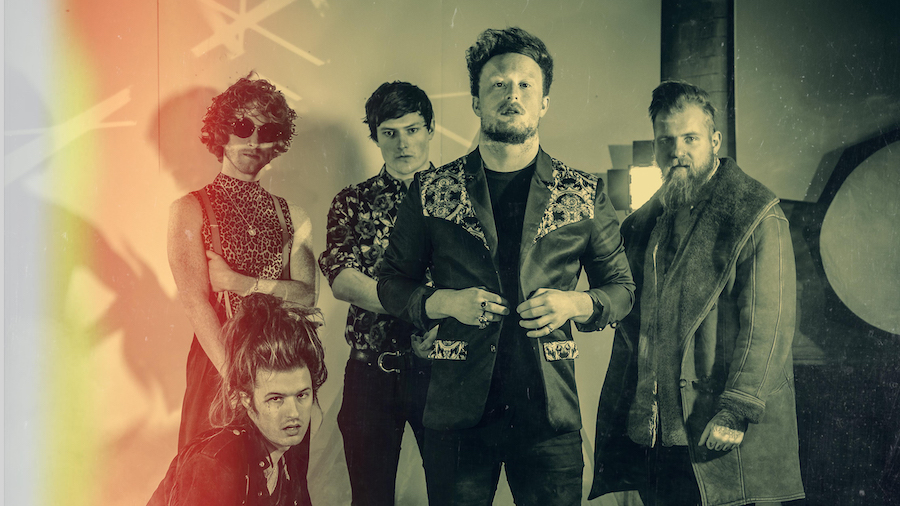 Having grown up on a musical diet that included Jimi Hendrix and Wilko Johnson, brothers Jordan and Joe Bell have been playing music together since they were 12. They now find themselves as part of Avalanche Party, a commanding garage rock band with psychedelic tendencies. Joined by guitarist Jared Thorpe, drummer Kane Waterfield and keyboardist Glen Adkins, they call the North Yorkshire village of Castleton home.

As part of the North Yorkshire moors, vocalist/guitarist Jordan and bassist Joe spent their youth camping on the moors. First living in the valley of Rosedale before moving to Castleton. While both areas are sparse and rural, Avalanche Party‘s activity spreads further afield towards Teesside. As Joe cites below, venues in Middlesbrough and Stockton-on-Tees is where the quintet have been honing their brand of delirious rock ‘n’ roll.

Read on as Avalanche Party‘s Joe Bell tells us more about Teesside and its impact and influence.

The Town:
Although I was born in Scarborough. I live in the North Yorkshire Moors. A place called Rosedale until I was about 21. It used to have a huge iron mine which was then used to build a lot of impressive things around the world. Sydney Harbour Bridge for one. I now live in a little place called Castleton which doesn’t really have much apart from two pubs and a Co-Op. What doesn’t place have a Co-Op these days? There is a 10ft sculpture above the village on the moor top of a bloke who looks uncannily like Jeremy Corbyn. Pretty nifty considering it’s a big tory area.

Its People and Culture:
As touched on previously, Rosedale used to have a huge iron mine. Hard to think now as it’s a little, sleepy as fuck, retirement home, holiday cottage that’s lived in for four weeks of the year type place. But there used to be thousands of people from all over the world that worked and lived in Rosedale. Constantly mining that iron then shipping it over to Teesside. Teesside steel was then shipped all over the world to construct such wonders all over the British Empire. From Sydney Harbour Bridge to the Victoria Falls Bridge over the Zambezi to the errr, Birmingham Bullring. Being Northern, we’re all hardy people who’ve just discovered how to make fire and like gravy on chips. Or something.

The Music It Inspires:
The area has had a bit of a battering recently with the closure of industry and shit TV fodder like Benefits Street. I couldn’t really say that has a bearing on what type of band the area produces but I know it’s spurred a lot of artists on. It’s quite pleasant to see local bands doing so well nationally / internationally and each in their own way showing the area in a positive light that the media wouldn’t.

Its Most Famous Musical Sons and Daughters:
Chris Rea is the man. He is probably the best known, I guess. He must spend a fortune on diesel that gadge. Dave Coverdale from Deep Purple/Whitesnake came from Teesside. Paul Rodgers from Free too. Heavy hitters in their field. Paul Smith from indie darlings Maximo Park was from Billingham. I won’t hear a bad word about any of them, especially Chris Rea. None of these are as famous as a Parmo though.

Its Unsung Heroes:
Growing up bands like The Chapman Family and The High Plane Drifters were hugely inspirational and influential to us. It was mega seeing bands like that coming from our area and touring all over the world. I remember watching the Chapmans at Leeds Festival when I was about 18/19 thinking this is right nice, I’d like to do that. Members from both bands have become really close friends nowadays which is cool. There was also a band from the 70s called Back Door. Think they were the first instrumental jazz band to sign to Warner. Pretty hefty stuff.

The Venues We Visited:
Probably seen the most amount of gigs in The Lion Inn, Blakey Ridge as a little nipper. My view was shit as I was a nipper. And little.

The Venues We Played:
Middlesbrough/Teesside is our local scene. Think we’ve pretty much done them all. From little tiny gigs downstairs in the Westgarth Social Club, to KU Bar and The Georgian Theatre, to huge gigs at Middlesbrough Empire and the Town Hall. We’ve probably done them all equally over the years. There is a decent platform and venues for a band to grow into on Teesside. We’ve not done our own headline at Empire yet though. I suppose that’s the goal. You could get at least three confetti cannons in there. Playing rough pub gigs as a 15-year-old probably shaped us most though. If you can play The Normanby on a Saturday night, you can play anywhere pal.

If I Wrote A Song About My Hometown:
A gabba song about cow tipping. Other bases have been covered.

‘Porcelain’ by Avalanche Party is available now on Clue Records.