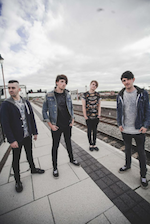 Taking Hayley have announced they will be heading out on a farewell UK tour in February that will conclude with a hometown show in Birmingham.

For the past three years as ‘Taking Hayley’ we have been lucky enough to tour the UK, record an album, make loads of fantastic fans and friends and play some incredible shows that we’ll never forget.

However, for us, our time as ‘Taking Hayley’ has come to an end. All of us still remain friends and this is in no way a falling out, we each simply feel that our paths in life are not those that can be fulfilled whilst a part of ‘Taking Hayley’. We sincerely hope that all of our fans and friends will continue to stick with us and support us in whatever each of us chooses to do next.

We want to say a big thank you to all the fans who have stuck with us through it all, all the venue staff, technicians, etc who helped make everything we’ve achieved possible and also to all the bands we’ve played and toured with for being a part of the amazing experience that it has been. We’d also like to extend a big thank you in particular to everyone from The Ballroom Birmingham, The Ocean’s Eyes, A Day Overdue, Strike Four Music London, The Summer Set, Fluorescent Hearts, Mindless Self Indulgence, Warped UK, Slam Dunk Festival, Yashin, Fearless Vampire Killers, Bentley Park, Drop Dead Clothing, Madina Lake and to anyone else who has played a part in helping us as a band.

To say the proper farewell to everyone who wishes to see us for one last time, we have booked a UK tour for early next year which will be FREE entry to all shows. We very much hope that as many of you as possible will be able to come to these final shows, we intend to make them the best that they can be.