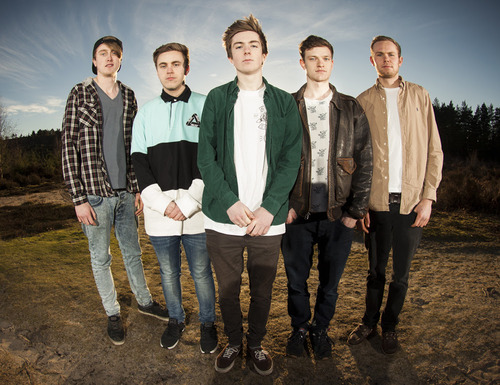 Having honed their sound for 12 months since forming in late 2012, rising UK pop-punks Homebound released their debut EP, ‘Coming of Age’, last month to much praise. Our very own Dane Wright described the EP as “a bold and striking debut”.

Its release comes as the UK pop-punk scene continues to rise, and Homebound are certainly one of the brightest emerging bands from the scene in recent months. It’s no doubt ‘Coming of Age’ hits all the right marks as wall-to-wall of feel-good, bouncy pop-punk that is filled with lyrical passion.

The process for this EP turned out to be one which was longer than our original predictions, and with it being a first time experience for 4/5 of us, we saw this as a real growing point for the band and ourselves, as musicians. A lot of decisions were made and altered along the way, overall the process of recording varied a great deal from how we first felt it would go. We originally intended to record ‘Turning Point’ as the first single for the EP, and so booked our first session with Ian Sadler (ROAM, Anavae) of Emeline Studios in Kent. But at a later date we decided against this, feeling we had stronger songs on the EP.

Coming of Age by Homebound

After concluding a lengthy writing process we finally booked up the studio, which was both an exciting and anxiety inducing prospect, ultimately were were keen to seee how this was all going to pan out. Sam had only been in the band for about 5 months at this point, and had found himself unable to complete the writing of his parts in advance, but when he stepped up to record he completed a majority then and there on the spot!

Over the coming days we saw the songs take shape and one by one sat and worked with Ian recording our parts. Ian pushed us to really get the best out of both ourselves and the songs we were recording. He contributed a lot of input throughout the whole process, helping us to make vital decisions, pushing us when needed and suggesting improvements. We worked quite late most evenings but found comfort in staying in a Travelodge in the evenings, snacking on takeout, skating and sleeping.

By the 3rd day, the reality had hit us that we didn’t have time to finish the vocals in the original amount of time, clearly I would have to be coming back to finish the last 3 songs. But we had just worked our arses, managing to get the best out of what we had done. As a result we left with a real sense of accomplishment and relief.

So we booked two more days the week following, allowing the rest of the band to accompany me as I went to finish his vocals, full of energy and ready to wrap the release. It worked out well having that break, and I produced some of the best vocal takes any of us had ever heard. All that was left was the anxious wait for mixes.