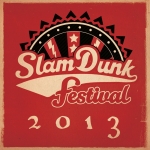 The likes of Sleeping With Sirens, Memphis May Fire, Man Overboard, Andrew McMahon, Mallory Knox, MC Lars and The Summer Set have been added to the line-up for this year’s Slam Dunk Festival.

They will join a variety of previously announced bands including headliners All Time Low, Pierce The Veil, Streetlight Manifesto, The Wonder Years, and more.

Tickets are £34 or £38 including the aftershow party.