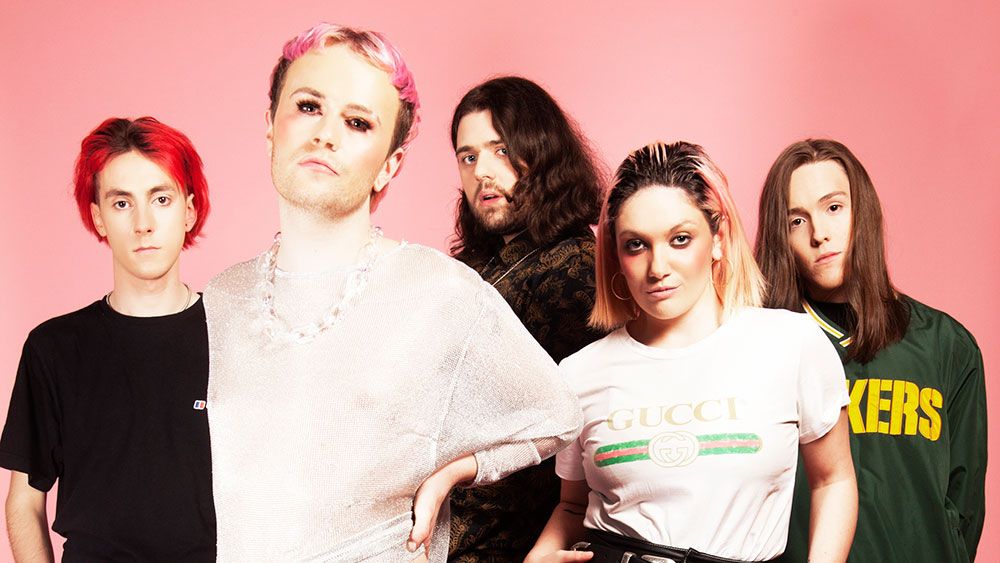 Whether it is playing the mud-filled Dogtooth stage at Download Festival or outside in the Somerset sun at Glastonbury, Queen Zee are a band who are able to bridge the gap between many demographics. The upbeat Merseyside quintet have mustered up a loyal following in their short existence, whether that be in the punk community, the LGBTQ+ world or just wider music fans.

And this quick ascent of popularity is something that isn’t lost on vocalist Zena Davine, who is very open about they fortunate position the band has found themselves in since the release of their self-titled debut album earlier this year.

“It’s so strange,” Zena explains. “We recorded one of these songs in my nan’s spare room, yet NME are like ‘this is record of the year.’ And I’m like yeah OK sure why not, it’s such a bizarre situation to be in.

“Like today [at Download], stepping out on to the stage and seeing a full tent of people to see us is a teenage dream come true.”

Having gained a reputation for having wild live shows, a number of line-up changes – at one point not even disclosing which members were actually in the band – it has taken the quintet a while to settle and find their own identity, as much as where they fit in the musical landscape. Davine added: “Some people are still trying to figure us out whether they are into us or not, just as much as we are trying to work out our sound.”

For all their upbeat songs and catchy choruses, at its heart, Queen Zee’s message is one of equality within society and how these barriers still need to be broken down. Songs such as ‘Loner’ and ‘Sissy Fist’ may have a jovial bounce to them, but the subject matter is something which is very close to Zena’s chest. But they admit that going out delivering the message of Queen Zee every night has brought about personal conflict as well as solace.

“It is an interesting position to be in at the moment because where I am talking about these ethics and beliefs all the time, I am constantly having to question myself and the position that I am in and the role that we play as a band,” Zena explains. “Doing this every night, you do grow as a person and being in this band has helped my own mental health massively.

“I think you’d drive yourself crazy if you think about all the struggles people go through too much. But I am in a privileged position because I have this awesome support network, but I know not everyone has that, that is why we continue to push forward.”

“We totally shove it down people’s throats, because if we don’t do that, then things aren’t going to change.”

But it is this privileged position that Zena and the rest of the Queen Zee crew are able to direct a message of equal rights, and they feel now is as good a time as any with news of homophobic and transphobic attacks still regularly in the news. “We totally shove it down people’s throats,” Zena continued. “Because if we don’t do that, then things aren’t going to change.

“Don’t get me wrong, we’ve never been in a better position but there is still so much more that needs to be done and we need to shout it from the rooftops that equality is nowhere near what it should be. There are a high percentage of people that want to sideline you because of who we are. There are people in the audience that are just there who want to make you feel unsafe. We have been on shows where the other bands are all males and they will never have that experience.

“There was an experience last year where a guy grabbed me and started beating the shit out of me, but this is a regular thing that we have to battle with and I don’t understand why they seem to be drawn to our shows.”

The one thing that Zena says the band has helped them with is the ability to be more forthcoming and helping with their own mental health struggles. With more eyes now shifting towards the five-piece, the person of Queen Zee is starting to spread its wings. But for Zena, they confess the lines are now starting to blur.

“I think over time I am becoming Queen Zee,” Zena proclaims. “And I’m not sure if that is a good thing yet. Like in my day to day life, I find myself doing things which I would not have done a year ago but it is definitely Zee showing her face.”

‘Queen Zee’ by Queen Zee is out now on Sasstone Records.

If you have enjoyed reading this article and would like to help us produce more content and promote more great new music, please consider supporting us our Patreon page.