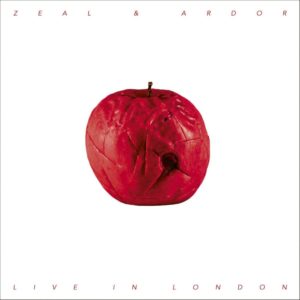 The problem with most live albums is that they can feel like largely perfunctory additions to a band’s catalogue. For Zeal & Ardor though, it’s much different; ’Stranger Fruit’ was such a phenomenal improvement, that building on it only seemed natural. Their fusion of classic blues and black-metal is unique and showing it off in the live environment is the next natural step.

More than most, ’Live In London’ feels like a true extension of Zeal & Ardor. There’s a lot more life and depth given the sweltering, percussive grooves of ’Blood In The River’ and ’Gravedigger’s Chant’ have more fire here, particularly with Manuel Gagneux’s robust howl. The uniqueness is kept more or less intact with the live environment, not withholding such crucial elements from their sound. If anything, it adds a sense of scope that makes it all come across as more fully-formed.

One of the problems of any live album – the inability to substitute the atmosphere of the show – continues to prevail, yet there’s such conciseness and malleability shown here, that it’s not a hindrance. Sure, the burning riffs of ’We Never Fall’ and ’Ship On Fire’ would have a lot more impact in the flesh, but there’s something so immersive about what Z&A have done here, not only in their imposing sound, but in the clarity presented. There’s still the roughness the material demands, but this feels like a true big-budget performance instead of a band who were once skulking around the Bandcamp scene.

And that’s what makes Zeal & Ardor so exciting; they’ve grown impeccably over the years, and even if there’s still more to do, the fact that an album like this even exists is a testament to where they’re at now. As is often the case, ’Live In London’ serves as more of an expansion than a substitute, but it shows a band moving forward with confidence and ambition that’s unparalleled, and that certainly bodes well for what their future holds.

‘Live In London’ by Zeal & Ardor is out now on MVKA Records.