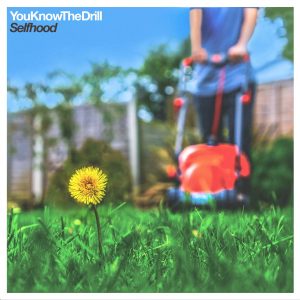 There’s no denying that the UK pop-punk scene is in a slump. Most of the bands that sparked the scene have moved on to bigger and, frankly, better things. Examples include Boston Manor, a band that have seamlessly developed from regional accented pop-punk to champions of alt-rock, and Trash Boat, who have seen a comfortable transition to hardcore punk-tinged punk rock. Some bands, however, seem adamant on sticking to the path well travelled. In doing so, such artists produce what could easily be the same four or five song EP over and over again, seemingly embracing the dead horse named mediocrity and repeatedly kicking it until its cold body coughs up something resembling a song.

As harsh as this may sound, it’s merely an exaggerated metaphor for what could be seen as the downfall of pop-punk. Unfortunately, this is where You Know the Drill’s new EP, ‘Selfhood’ sits. There’s nothing new or interesting here. No hint of inspiration-driven style at play, no pushing the genre in new directions. ‘Selfhood’ is straight, boring pop-punk.

That’s not to say that they don’t do it well. In fact, this EP is the tightest the band have ever sounded. Opener ‘Overcast’ is, perhaps surprisingly a genuinely full-sounding, well-produced track from a genre that has produced many low quality sounding EPs over the years. Having heard this track however, you’ve essentially heard the whole EP.

‘Selfhood’ is almost as cliché as it gets, right down to the acoustic track ‘Blossom’, a three-and-a-half minute number that goes on for three-and-a-half minutes too long. Its only redeeming quality being that it breaks the pace slightly. Even then there’s still time for ‘Snake Eyes’ to revert back to the trite pop-punk that came before it.

If you’re after that run-of-the-mill stuff everyone moved on from about two years ago, then go ahead and listen to ‘Selfhood’. Otherwise, check out any of the bands that were already utlilizing this sound two years ago, as they’ve all progressed to something much more interesting.

‘Selfhood’ EP by You Know the Drill is released on 22nd June.