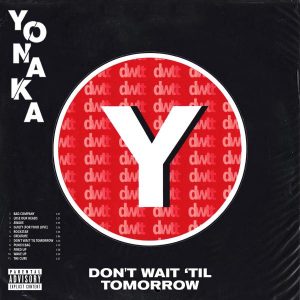 Yonaka are aiming high. They’re ambitious and it’s shown after a prolific few years. Trading on a robust pop sound with a rock edge, they released a seemingly endless series of singles and short EPs. It’s worked well, allowing them to experiment while securing notable support and festival slots. On last year’s two EPs, ‘Teach Me To Fight’ and ‘Creature’, they first blasted out direct pop-hooks then explored deeper sounds, setting the stage for their debut album. ‘Don’t Wait ‘Til Tomorrow’ continues where they left off and they aren’t looking back.

Opener ‘Bad Company’ wastes no time, drawing you in with a hypnotic bassline a sultry vocal. Yet, it doesn’t go as hard as you expect. Right there you realise this isn’t a straightforward pop record. You’re not going to be handed satisfaction on a plate. Instead they embrace the electronic edge, artfully weaving together pop and rock sounds to create a spiderweb you’ll be unable to escape from.

Each song flexes its muscles in different ways. Bigger guitar riffs add weight to ‘Punch Bag’ whereas ‘Awake’ is underscored by a nightmarish synthetic soundscape. The sprinkling of 90’s synths on ‘Rockstar‘ are never overpowering, which helps to push the modern sound. However, you might have to forgive a little awkwardness, the club-bothering ‘Lose Our Heads’ is oddly safe compared to everything else.

The album’s real allure lies in singer Theresa Jarvis’ unusual relationship to melody and often the biggest hooks don’t appear where you expect. Especially as the way she rapidly spits phrases, cleverly catching you out during verses. It’s both exciting and fascinating. ‘Punch Bag’ is like fighting a vocal boxer. Hooks fly in from left and right, knocking you flat with their unexpected power.

Yonaka are serious about their music. ‘Don’t Wait ‘Til Tomorrow’ is bursting with creativity and you’re not getting a free ride. Rather than grab you, its bold and uncompromising vision subtly reaches out and pulls you below the surface.

‘Don’t Wait ‘Til Tomorrow’ by Yonaka is released on 31st May on Asylum Records.