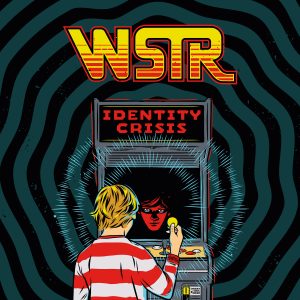 Since releasing debut album ‘Red, Green or Inbetween’, WSTR have moved forward exponentially, signing to Hopeless Records in June and currently preparing for a first US tour. The move to Hopeless coincided with the announcement of the follow-up to ‘RGOI’, ‘Identity Crisis’, but also saw the band part ways with guitarist Danny Swift.

The first thing to say is that the songs released so far from WSTR‘s second album – recorded with Swift present – have less flair than the tasters of ‘RGOI’ had. First single ‘Bad To The Bone’ was a fun but odd marker to lay down, and the most recent, ‘Silly Me’, is little more than a jaunty diversion. And yet, there is something about the rest of ‘Identity Crisis’ that suggests it may possess a longer lifespan than its predecessor, and more substance.

Maybe it is the incisiveness of ‘Tell Me More’ as one of the more rough-edged things the band has produced and a ready-made set-opener, laced with a certain new energy while sticking to the formula that has served the Liverpool pop-punks well thus far. Perhaps it is the success of ‘The Latest’, the heavy-handedness of which shouldn’t work but empathically does, steeped in the influence of Weezer while planting itself firmly in the subconscious.

Then again it could be the audacity to semi-parody a Cliff Richard song – ‘See You In Hell’ is the first token acoustic song from WSTR, and there is a knowing humour to its chorus that just about prevents a buzzkill. Or it might be arguably the pick of the lot, ‘Hide Everything Sharp’, with its suitably razor-edged melody and a fresh, alt-rock lead guitar tone that hands down beats the hit-and-miss solos that the band tend to shoehorn in.

It might not have the sugar-rush impact ‘RGOI’ had on release, but as a piece, ‘Identity Crisis’ finds WSTR with a higher hit-rate than ever before. It firmly secures their place at the forefront of UK pop-punk.

‘Identity Crisis’ by WSTR is released on 31st August on Hopeless Records.