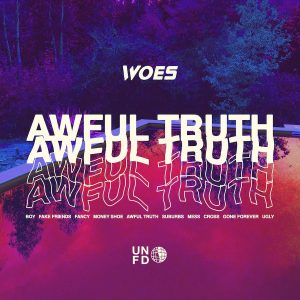 Ever since arriving in 2016, Scottish quartet Woes have firmly been part of the UK pop-punk train that has been driven by Neck Deep. Yet as a host of singles and EP’s that have preceded this debut album showed, they’ve accomplished delivering routine pop-punk and it’s time to branch out.

Considerably, it’s a welcome change in direction for a genre that has somewhat lost its momentum. That’s not to say Woes have completely abandoned their pop-punk origins; ‘Awful Truth’ is scattered with big, infectious hooks (see ‘Suburbs’ and ‘Fake Friends’) but a cleaner, more pop-centric delivery proves to be beneficial. With its production cues taken from modern R&B and hip-hop, their execution is sharper.

Early cuts, ‘Fancy’ and ‘Money Shoe’ have a sun-drenched, funk-laden flair akin to Lower Than Atlantis and Don Broco. When it comes to delivering bold, guitar-driven choruses, both songs accomplish this with ease.

On the downside, the lyrical narrative of the band reflecting on a hectic 18 months and the personal and collective struggles that coincided with it, doesn’t quite to fruition. It gets lost amongst the soaring, upbeat tone that songs such as ‘Mess’ and ‘Gone Forever’ heavily lean on. Sure their intentions mean well as ‘Fake Friends’, the atmospheric alt-pop number ‘Cross’ and ‘Ugly’ demonstrate they’re able to provide some lyrical depth and sincerity. Nevertheless, ‘Awful Truth’ is, to an extent, more a case of style over substance.

While it doesn’t quite feel like a solid, concise body of work, it’s clear Woes are conscious of how they want to shape their music going forward. It’s just not fully realised within these 10 songs. Although simultaneously, they don’t entirely abandon their pop-punk framework, they use it as effectively as possible.

Considerably, ‘Awful Truth’ could be treated as a transitional release for Woes. They’re able to dip their toes out of their comfort zone but they’re far from ready to take the plunge. In the meantime, embrace Woes‘ flair for delivering big, fun hooks.

‘Awful Truth’ by Woes is released on 28th June on UNFD.