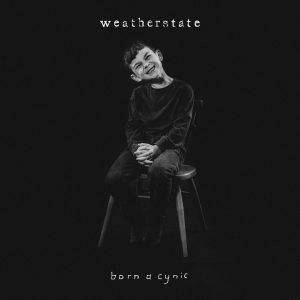 Picking up where 2016’s ‘Dumbstruck’ EP left off, Bristol’s Weatherstate are back with their debut album. With a name like ‘Born A Cynic’ you won’t be expecting a happy bouncy pop-punk record but this 11-song set features all the genre’s catchiness buried under a layer of grime. In fact the grinning boy on the cover perfectly captures the band’s devilish cheek.

The album’s sound is fast and anxious, rounded out with a wonderfully snotty, sneery edge. You can definitely hear the influence of 90’s pop-punk bands. When ‘Medicate’ opens you would be forgiven for thinking it was Green Day revisiting their roots. The music video is even a homage to ‘Basket Case’, so they’re aware of what they’re doing. Don’t worry, although they wear their influences on their sleeves, they work hard to make the sound their own.

Vocalist Harry Hoskins carelessly describes his songs as ‘jams’ but you can’t deny the craft here. Each has its own quirks and avoids an uninspired three-chord structure. You get filthy guitar squeals on ‘Rotten Lungs’ and the wonderfully scuzzy gallop of ‘Ghost’ shows off their energy. ‘Brain Dead’ is the best example as it is broken up by fantastically noisy section, which really plays on the dirty punk aesthetic. However, on ‘Barely Human’ their intelligence is clear. It feels smart and fun. It’ll be the song to grab your ears with its strong hook, but almost every song here offers a chorus to hum.

At times the album feels a little distant and the song ‘Cynic’ highlights just why. The lyrics lack warmth and it’s a little alienating and a little hard to love. It doesn’t stop the songs being catchy, or well-executed, but it’s almost like Hoskins is trying hide himself rather than opening up. However, if you like your pop-punk with a dose of snotty attitude ‘Born A Cynic’ is the record for you. Its sneering vocals will hook you in, keep you singing along while pushing further than the sum of its influences.

‘Born A Cynic’ by Weatherstate is released on 10th May on Failure By Design Records.