Review: We Never Learned To Live – The Sleepwalk Transmissions 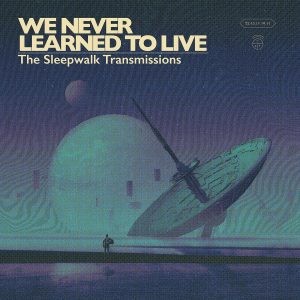 When the term “sci-fi concept album” is used, many will instantly think of elaborate, prog-infused music that demands attention. Thankfully, We Never Learned To Live‘s second full-length isn’t quite as complex yet ‘The Sleepwalk Transmissions’ is a record worthy of being showered with praise.

Having previously shown their ambitions on their debut album, the Brighton quartet’s sophomore effort aims to expand on them. Vocalist Sean Mahon looked to the work of Philip K. Dick as inspiration, and when combined with the band’s sonic dexterity and captivating craftsmanship, you’re left with a stellar post-hardcore record.

From the opening moments of ‘Permafrost’ with monolithic pounding drums before giving way to sharp guitars and Mahon’s yearning for “the sound of humanity”. When combined with following track, ‘Android Anaesthetist’, it sets the lyrical tone for the record; bewildered and lost in space. While ‘Human Antenna’ admits to ceasing to exist when trying to make a connection.

Over the course of the record, WNLTL explores the feeling of anxiety, being absent, and how memories can become twisted. Complimented by a textured soundscape, songs such as ‘The Clocks’ and ‘Luma / Non Luma’ are bombastic, occasionally retreating to capture the emotional essence conveyed. Whereas the closing pairing of ‘Digitalis’ and ‘Radio Silence’ discusses the significance of reality and the urge to disconnect from everything. It’s a thought-provoking narrative in a time where technology consumption is so dominant.

Although Mahon’s storytelling ties these 11 songs together, they benefit from a robust performance from his bandmates. Drawn out numbers such as ‘Wounds Like Wires’ and ‘Owari’ allows them to be dynamic, effortlessly blending heavy riffs with drifting, serene moments. The latter additionally highlights the stirring, sonic soundscape on offer.

When it comes to being invested in a record, ‘The Sleepwalk Transmissions’ hits all the required marks. From the stringent songwriting to its assured pacing to the versatility of each member, We Never Learned To Live have delivered an engaging album that shouldn’t be ignored.

‘The Sleepwalk Transmissions’ by We Never Learned To Live is released on 10th May on Holy Roar Records.