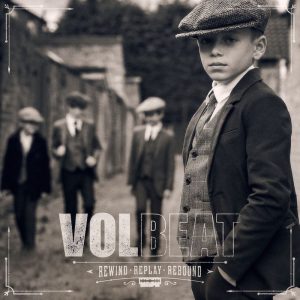 For nearly 20 years, Volbeat‘s winning combination of rock n’ roll, metal and rockabilly has granted them worldwide success, along with coveted festival spots and tours alongside Slipknot and Metallica. The Danish heavy-hitters are now back with their seventh record, ‘Rewind, Replay, Rebound’. With their stylistic traits firmly in place, Volbeat fans aren’t going to be disappointed.

Starting on a high note ‘Last Day Under The Sun’ takes inspiration from second chances and not giving up. The track is an anthem to a very relatable topic with a catchy chorus and Gospel Choir to match. On the other hand, ‘Pelvis On Fire’ is a mosh-worthy punk thrasher with a rockabilly touch.

Some of the themes explored on ‘Rewind, Replay, Rebound’ are relevant to many listeners. ‘Die To Live’, which features Neil Fallon (Clutch), is a rock n roll banger. ‘Die To Live’ outlines how the pursuit of perfection is often a hollow goal, but this seemingly negative outlook is contrasted with fast-paced rock riffs, piano and saxophone. ‘When We Were Kids’ explores the innocence and belief in immortality experienced in youth. This track grows from a ballad style beginning to a heavy breakdown, exhibiting Volbeat’s style very effectively.

‘Rewind, Replay, Rebound’ features some really catchy tunes that are more ‘poppy’. For example, ‘7-24’ is carried with a 90’s pop-rock feel that uses female backing vocals with sweet lyrics, adding a soft edge and a different flavour in the album. Similarly, ‘Cloud 9’ is a classic rock belter that combines heavy riffs with a positive feel.

Volbeat haven’t lost their heavy roots. ‘The Everlasting’ is a beast of a tune, and more akin to earlier Volbeat with a touch of classic metal. In a similar vein, ‘Cheapside Sloggers’ breaks down to a heavy and shred-tastic solo by Gary Holt (Slayer, Exodus).

‘Rewind, Replay, Rebound’ is a heavy, anthemic and catchy record. This album will stick in your mind from the first listen. A quintessential Volbeat record.

‘Rewind, Replay, Rebound’ by Volbeat is released on 2nd August on Vertigo.