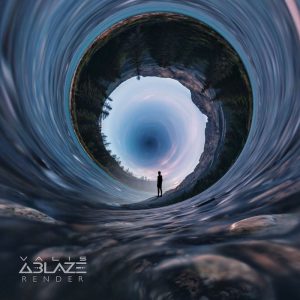 It’s clear that Valis Ablaze know how competitive the tech-metal world is, and so their decision to strike while the iron is hot makes sense. Their debut ’Boundless’ only came out last year, after all, and while a rapid follow-up could be indicative of fertile creative grounds, it could just as easily point towards a band rushing forward to give themselves an artificial and fleeting leg up.

Thankfully, ’Render’ does seem to be closer to the former; Valis Ablaze do have talent, after all, and it’s being put to good use here. That said, ’Render’ does end up feeling like more of the same overall, not advancing within the tech-metal realms and preferring to stay in the spacious, melodic ground that’s a good fit, but has been done a whole lot with little variation. There’s certainly an excellent command of that melody in tracks like ’Hollow Heart’ and ’Saturation’, but Valis Ablaze simply playing to their strengths has less of a thrill behind it than some real experimentation.

But with that being said, the sonic clarity and expansive tableaux of guitars really do sound good, and Phil Owen has the pop focus in his vocals that give bands such as Periphery such a distinctive edge. Valis Ablaze aren’t quite at that level, but the swirling tumult of ’Keyframes’ and the metallic heft of ’Elevation’ make good use of that versatility that connects in a big way. It mightn’t be all that inventive overall, but as an unshakeably solid example of pretty much everything great about tech-metal, ’Render’ really works.

And that’s why it feels like Valis Ablaze are still doing good work here. This is by no means a landmark album in the genre, but they’re a band who knows what they’re good at and sticks to it. It means that ’Render’ isn’t as amazing as it could be, but it’s definitely worth a few spins nonetheless.

‘Render’ by Valis Ablaze is released on 19th July on Long Branch Records.