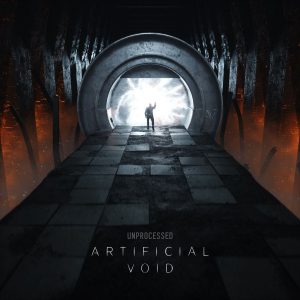 Another day, another tech-metal band looking to wriggle their way into a scene that’s honestly gasping for air at this point. But apparently Germany’s Unprocessed are being more hotly-tipped than others, partly for the precociousness they’ve already displayed, and partly their new album, ’Artificial Void,’ apparently goes that next step and establishes them as something great.

And on the whole, this isn’t a bad album, but the ever-present boundaries of tech-metal still apply, even if they’re ultimately adhered to well. Of course, there’s notably a technicality on tracks such as ’Prototype’ and ’Antler’s Decay,’ that lends the impressively clinical jaggedness that’s always a selling point. Then there’s the adoption of more atmosphere and melody of ’Fear’ and ’Avatar’ that shows off the subtleties in Manuel Gardner Fernandes’ vocals well. It gives Unprocessed the dimensionality that bands like this often need. Even if there’s not a great deal of uniqueness, all the tech-metal beats are hit with excellent accuracy.

But that’s ultimately the biggest issue; for as good as they are at nailing down the basics, Unprocessed are yet to grow beyond that. The material here is strong, sure, but it can be just as interchangeable as so much of tech-metal that this is apparently above, and given its hour-long runtime, it can be a struggle to really stay fixated on it. That’s where Unprocessed simply fall in line with other tech-metal bands; they’re not bringing anything that makes them stand out. They feel like just another face in an incredibly squeezed crowd.

It’s not like ’Artificial Void’ is completely forgettable either, but it’s more like a first step than any considerable movement to bigger things. Unprocessed are clearly talented and they show that in spades, but channelling that talent into something distinct to them is the only way they’ll make the moves anticipated for them.

‘Artificial Void’ by Unprocessed is out now on Longbranch Records.