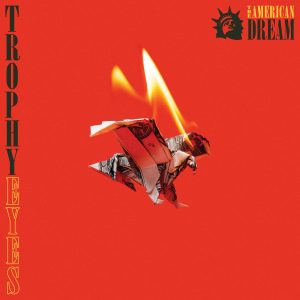 Escaping from normality can do funny things to people. For Trophy Eyes frontman John Floreani, leaving his native Australia for the small Texan town of Burleson allowed him to reflect on his life and the events that he and his band have had in recent years. The end result is ‘The American Dream’, a record that flourishes with lyrical wiseness and bold, addictive hooks.

Where 2016’s ‘Chemical Miracle’ was carried with angst and bitterness, Trophy Eyes‘ third record is led with a hopeful spirit. At its core is a singer who is still looking for an identity. “I don’t have any answers for you kid, I’m still figuring it out what I’m doing here” Floreani sings on upbeat opener ‘Autumn’. Throughout, he contemplates mortality (‘Something Bigger Than This’), wanting to be someone else (‘More Like You’), and to be recognised back home (‘Lavender Bay’).

While hints of their pop-punk origins appear throughout, the Aussie quintet show there is much more to their musical arsenal. There is the rose-tinted rush of ‘Friday Forever’ and its rapid U2-esque guitars. ‘More Like You’ is carried with a tribal groove. While later on ‘Tip Toe’ is wrapped in a succulent, balladic tone with sweeping orchestration.


And then there is the plethora of gang vocals scattered throughout. Combined with plenty of fist-in-the-air moments, songs such as ‘You Can Count On Me’ and ‘Something Bigger Than This’ counter the personal narrative with colossal hooks, delivered with unity.

Although Floreani steals the show throughout, both with his songwriting and his superb vocal range, his bandmates collectively add to the concise presentation. While swells of strings supply a sense of grandiose.

‘I Can Feel It Calling’ rounds off the album with great pride and a sense of acceptance. Delivering a rush of emotion and affection, the six-minute number brings everything that came before it together brilliantly.

Bands like Trophy Eyes should be celebrated and embraced as ‘The American Dream’ is the sound of a group finding their voice and flourishing with confidence. Ultimately, it’s the seed of a band who could do something truly special.

‘The American Dream’ by Trophy Eyes is released on 3rd August on Hopeless Records.