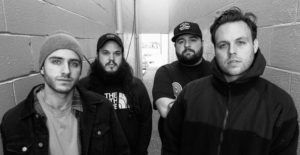 It is difficult to talk about Trade Wind without acknowledging their roots. Founded by Jesse Barnett from Stick to Your Guns and Tom Williams of Stray From The Path, it is a side-project but with a growing discography, they have firmly consolidated themselves as an entity in their own right. Tonight, they’re playing in Manchester as just one of two UK shows promoting the softer, more atmospheric musings of their new album ‘Certain Freedoms’.

Los Angeles songwriter Scott Ruth (3.5/5) opens the night. Without a band backing him, it’s just his voice and a Gibson electric guitar, but it’s enough. His heart-wrenching country songs have the small crowd enraptured. It’s a simple, confident set sold by the honesty of his voice. Members of the headline band join him for ‘Roll Away My Stone’ and the fuller sound ends the set on a high note.

After a quiet opener, Modern Color (3.5/5) are a complete contrast. They play a strange mixture of indie pop, space-age lead guitar and screamo. It shouldn’t work and yet they perform with such energy and passion the disparate elements flow together. It’s a strong set, mostly cut from their album ‘Time Slips Behind Us’. The crowd bob their heads along to the bright charming guitar strums and then recoil as a filthily screaming section elbows its way in. By sewing everything together with clever lead guitar lines they make it work. So while the whole performance is odd, it is assured and the audience goes with it.

Trade Wind (4/5) take to the stage and dip straight into the atmospheric leanings of ‘No King But Me’. Immediately you’re surprised by their confidence and how well the song works in a live setting, perhaps more so than on record. True, they have plenty of experience as part of other bands, but they play together extremely well. It’s an energetic set too, especially when you consider how quiet and atmospheric many of their songs are.

Playing a 12-song set, they span all three releases and make unexpected choices. New material slots easily amongst older songs and goes down surprisingly well. While they may be shorter, they feature sounds that fill the space and creeps down the back of your neck. This is due to Tom Williams’ effects-laden guitar parts. Complimented by delicate loops and a keyboard they flesh out the sound without smothering it. Andrew McEnaney’s drum parts are beautifully executed too, adding just the right amount of drive to the atmosphere.

Jesse Barnett is a confident frontman and seems genuinely pleased to be playing in Manchester. It’s a strong performance and he gives choruses enough grit to make them really hit home. ‘Close Encounters’ and a soaring version of ‘Certain Freedoms’ give more powerful songs such as ‘I Hope I Don’t Wake Up’ a run for their money. However, ‘Fixed Blade’ early in the set sounds absolutely huge.

Despite much of the performance being made up of sweeping effects-laden guitars, the set still feels focused and passes quickly. Finally, they close with ‘Radio Songs’ which seems like an unusual choice, until you discover just how heart-wrenching they can make it sound. It’s a great performance and a privilege to see this band live. You can’t help wishing it wasn’t such a short run.