Review: Torchbearer – Against The Tide EP 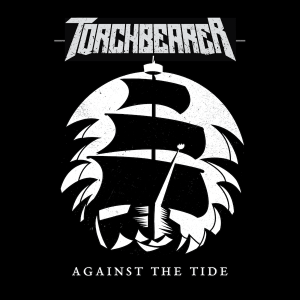 Three years after their debut, Torchbearer are blasting back onto the stage with follow-up EP ‘Against The Tide’. Having relocated and whittled down their line-up, they come armed with five slabs of angry hardcore, aiming to set the scene alight.

While their previous EP, ‘Pass The Night’, showed promise, the overly long songs couldn’t always hold your attention. This time, they’re tighter, focused and far more satisfying. The huge rush of opener ‘Time Served’ makes a storming first impression. Frantic drum beats from Scott Harris take charge while Ollie Gould throws around a barrage of slick guitar riffs. It’s the band on top form and a solid start, but while they’ve shorn away the fat, their music is still difficult to chew.

Produced by Jack Longman, the EP has a heavy, raw sound. The high quality, professional mix really brings out the music’s power. Notably, ‘Ascender’ is absolutely massive, especially during the huge riff around the midpoint. It’s the same story on ‘Drown’ where a powerful outro swoops in. However, the band fails to capitalise on this and the songs limp to a conclusion. Leaving a solid, but bland and unadventurous overall impression.

Andy Mansell doesn’t have a bad voice, but it’s fairly generic. Hence, one bellowed passage sounds much like another and the choice of lyrics really doesn’t help.  Not because they’re bad, but because the same phrases are repeated in uninteresting ways. To the band’s credit, they try to sidestep this by using two backing vocalists. Strikingly, ‘Paralysed’ layers melodies on top of Mansell’s yells. However, they repeat the same clean passage, over again and it’s extremely tiresome. ‘Torchbearer’ suffers a similar problem, relying on an uninspired cry in place of a chorus.

A step in the right direction, Torchbearer have the riffs and a solid sound, but they are sorely lacking a spark. ‘Against The Tide’ is a solid base to build upon and its big sound will no doubt serve them well on the live circuit.

‘Against The Tide’ EP by Torchbearer is released on 12th July.