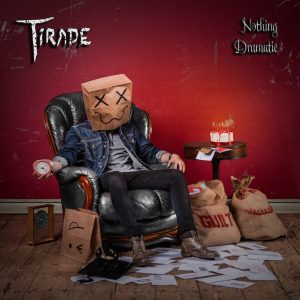 Manchester alt-rockers Tirade have pulled together a brand new EP, ‘Nothing Dramatic’, making a record that, in their words, is “a reflection of all our individual and unified music tastes”.

The title track opens us up with the type of guitars you’d expect from later career Lower Than Atlantis. The punkish vibes begin here and don’t let up for most of the EP, making them a one to watch for fans of the punk scene in general. ‘No Time’ continues the LTA vibes but is a much catchier track that has the potential to pull the listener into the EP and, perhaps, the band as a whole. The perfect choice for a single, ‘No Time’ is the clear highlight.

‘To Be Honest’ moves away from the pop-punk a little, being a more explicitly ‘rock’ track. It works well, creating an accessible song which was inarguably a great choice as a single. Follow up ‘Burned Out’ puts us back on the punk track and is a song you can’t help but bob your head to, sounding at times like it could’ve emerged from the vaults of 90’s Green Day, in the best way.

While closer ‘Well Spent’ begins to give the EP the riff-loaded send-off it really needed, but at the cost of some of the infectiousness present prior. Having a more hardcore edge, it shows the band have more to them than simply catchy punk, but its lack of originality means it falls a little flat over, despite the killer riff.

Overall, ‘Nothing Dramatic’ is a good EP. Though the songwriting isn’t as tight as it could be, Tirade have produced some infections alt-rock that shows a tonne of potential. However, at times similarities to other artists is more detrimental to the band than redeeming, boxing them in rather than letting them shine as an individual band. That being said, the EP is worth a listen and the band are certainly worth following.

‘Nothing Dramatic’ by Tirade is released on 30th August.