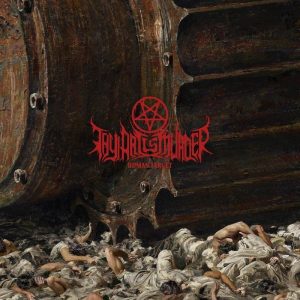 Sometimes, in music, you just need to listen to a record so ferociously, unapologetically brutal that it feels like the songs are breaking into your house, punching you in the face, and setting something on fire. Over the last decade, the band most consistently responsible for producing said records has been Aussie deathcore godfathers Thy Art Is Murder. Their latest attempt, ‘Human Target’, does nothing to break the streak.

Their fifth album picks up where their 2017 effort, ‘Dear Desolation’, left off, in that they make more forays than ever into different corners of the metal world. From technically-minded riffage (in the opening of ‘Make America Hate Again’) to mountains of black metal influence (on ‘Eye for an Eye’), no boulder is left unturned.

At the molten centre of it all, though, lies the band’s signature sound: a crushing amalgam of death metal and hardcore so hot-blooded and exciting that it seems unfair to label it “deathcore” (a word tainted over the course of the decade by formulaic copycat artists). Frontman CJ McMahon leads the charge with his instantly-recognisable vocal chops and is backed up by blistering, evil-sounding guitarwork, monstrous bass, and outright violent drumming. Each song brings a new surge of adrenaline, and the record as a whole becomes an unstoppable force.

To the surprise of nobody familiar with the band’s work thus far, McMahon isn’t afraid to get political on this record when it comes to lyricism. ‘Human Target’ tackles a multitude of contemporary issues head-on: there’s the almost self-explanatory ‘Make America Hate Again’; an assault on the culture of social media on ‘New Gods’; even a furious statement on the prison-industrial complex on ‘Voyeurs into Death’. As exhaustingly heavy as this record is, poignant socio-political commentary runs through its lifeblood as much as blast-beats and breakdowns do.

‘Human Target’ might be Thy Art Is Murder’s most impressive album yet, and it presents a compelling argument that the five-piece are one of extreme metal’s best and brightest right now.

‘Human Target’ by Thy Art Is Murder is out now on Nuclear Blast Records.