Review: Throes – In The Hands Of An Angry God 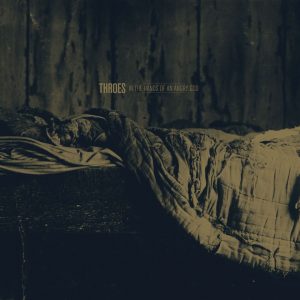 You get a strange feeling when Holy Roar announce a new band; a mixture of excitement and existential dread. Throes are a new addition to their impressive roster and their music inspires exactly that. On debut EP, ‘To Dust,’ they combined sludge and doom metal with groove riffs, creating a sound similar to Mastodon being dragged through Hell. For their first full-length, ‘In The Hands Of An Angry God’ the sound has evolved significantly. The riffs are less prominent with heavier emphasis on atmosphere. It’s less distinctive, but it’s still extremely powerful. This isn’t an album for the fainthearted.

The oppressive trip into the underworld begins with ‘Bad Meat’. It’s short, relatively accessible and sees the band at their most intimidating. However, each successive track shifts and changes. A mammoth drum sound is dominant and even the simplest fill sounds monolithic, but otherwise each song has its own sound and atmosphere. The uncomfortable guitar lines of ‘Derelict’ worm their way under your skin, while ‘Disillusion’ uses a slow, haunting vocal to the same effect. It’s never too overbearing, except when it wants to be.

‘Nothing New’ is a work of evil genius. Layered over a simple drone riff, it piles on ideas, only to strip them back, just so you can hear its inner workings. The whole song makes an art form out of being sickeningly oppressive. ‘Carrion’ uses a similar trick only with a nasty little guitar sound. Vicious and paired with the doom-laden backing, it’s like being pecked at by hungry vultures.

However, the soul-sapping midsection might test your patience. Especially during ‘From Their Nails’ where a wandering, detuned guitar drains the momentum. Yet, when the powerful howls arrive toward its end the song redeems itself.

As its name suggests, ‘In The Hands Of An Angry God’ is an uncompromising vision. A constantly evolving journey, it manages to be aggressive and angst-ridden yet alarmingly creative. The sound of distress bottled, you will need your soul cleansed after listening to it.

‘In The Hands Of An Angry God’ by Throes is released on 26th July on Holy Roar Records.