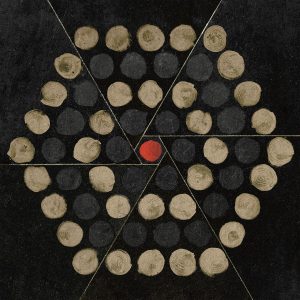 Where some of their peers have failed to evolve, Thrice have become a tremendous, versatile band specialising in intriguing lyricism and compelling song craftsmanship. 2016’s ‘To Be Everything Is To Be Nowhere’ is an acute example of this, showing a band reinvigorated after a hiatus. Considerably its follow-up, ‘Palms’, has a lot to live up to. Nevertheless, it maintains the momentum its predecessor has provided.

Buzzing synths seep in on ‘Only Us’ with the gradual build paying off with thick, slabbing bass lines. While Dustin Kensrue sets the lyrical tone for the remainder; contemplating our place in life and the responsibilities we have.

This is epitomised by ‘The Grey’ and ‘The Dark’. The former is classic Thrice yet with a more vivid delivery. Notably, Teppei Teranishi’s guitar work creates a sonic soundscape that is preserved throughout. While Kensrue finds clarity in realising not everything is black and while. As for ‘The Dark’, a scaling bass line trods along as Kensrue declares he’s “not going to sit in the dark anymore”, complemented by a haunting choir made up of fans.


‘Everything Belongs’ is Thrice at their most poignant as gentle instrumentation complements Kensrue’s weathered voice and comforting lyrics. In comparison, ‘A Branch in the River’ and ‘Hold Up a Light’ roll through with urgency as the rhythmic sibling duo of Eddie (bass) and Riley (drums) Breckenridge provide a riveting display.

It’s unfortunate that ‘Palms’ ends on a slightly downbeat note. Although ‘Beyond the Pines’ is Thrice at their laid back, mid-tempo alt-rock best, it’s not that memorable. Nevertheless, the 10 songs on offer are carried with a sense of fluidity. Whether it’s Kensrue’s philosophical, self-reflecting words or the measured musical intensity that weaves its way throughout, Thrice‘s execution is enduring and thoroughly convincing.

As cliché as it might be but arguably Thrice are a like a fine wine; the older they become, the better they get. ‘Palms’ is another significant addition to an already stellar discography.

‘Palms’ by Thrice is released on 14th September on Epitaph Records.