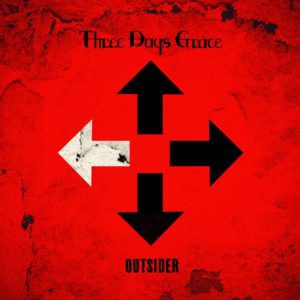 The days of ‘I Hate Everything About You’ and ‘Animal I Have Become’ are long past for Three Days Grace. Instead, the Canadians are now lodged firmly into the mid-period slump that afflicts so many post-grunge and hard rock bands, seemingly putting out albums for the sake of keeping a fanbase placated and nothing else. And in the grand tradition of diminishing returns, here’s ‘Outsider’, the last gasp at anything remotely relevant from a band who crossed that bridge years ago.

And there’s definitely some semblance of trying here, most noticeably adopting the electronic flourishes of many modern hard rock acts, and actually using them suitably on ‘Infra-Red’ and ‘Me Against You’, with sharper guitars and an overall crispness in the production. But pair that with muddy post-grunge riffs and Matt Walst’s utterly unidentifiable delivery, and it becomes clear that ‘Outsider’ is basically every other Three Days Grace album masquerading as something fresh and new.

It’s not, of course, but even in their most fervent efforts to portray themselves as a band in touch with modern trends, the tropes and clichés come flooding back on ‘I Am An Outsider’ and ‘Villain I’m Not’. Two of the most on-the-nose attempts to pander to teenagers seeing themselves as outcasts. It’s about as shallow as it comes lyrically, rarely lifting itself beyond derivative prostration and rarely even doing that in a way that’s compelling. Beyond the odd hook that might drive a live show a bit further, ‘Outsider’ has precious little that’s memorable, if even worth remembering.

But that’s an easy conclusion to come to. Three Days Grace are nothing close to relevant at this point, partly because the post-grunge wave they once rode has totally petered out, and partly because they insist on recycling the same themes and styles album after album. And as the latest in the production line, is it even worth bothering with?

‘Outsider’ by Three Days Grace is released on 9th March on Music For Nations.