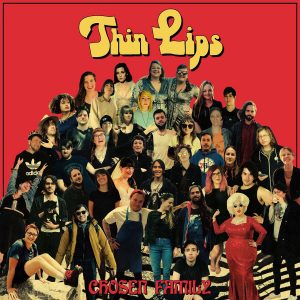 Following on from their 2016 debut ‘Riff Hard’, Philly darlings Thin Lips are back with their sophomore record that is far from being a slump. This time their blend of breezy power-pop tackles maturer subject matters. Despite some standard emo cliche’s of heartbreak and awkwardness still being there, they have strayed away from the obvious Modern Baseball comparisons (apart from frontman Brendan Lukens’s subtle appearance on ‘Gaslight Anthem.’)

If anything, ‘Chosen Family’ has nods veering more towards Weezer and All American Rejects, especially the bubblegum pop sweetness of ‘A Song For Those Who Miss You All The Time’. Not to be overshadowed of course by the sorrowful nature of the lyrics, as frontwoman Chrissy Tashjian reflects on her younger brother’s passing. This sleek contrast dosen’t detract from the serious nature of a family member passing, but rather feels like finding comfort in the mourning process.

Dynamically there is a shift from the gritty, abrasive tempos of their previous material. There’s an almost trashy, lo-fi tone to Tashjian’s blaring guitar hooks, oozing with early pop-punk that feels warm and comforting. The woozy, seductive “ooos” on ‘I Know I’m An Asshole’ seeps into 60’s surf rock territory, all whilst retaining a healthy serving of romanticised self-depreciation; “I’ll break my own heart for you again, I’m feeling bad for you my friend.”

In contrast, ‘Sex Is Complicated’ and ‘South America’ tick all the boxes for catchy, fast jams to bop along to with their enormous choruses.

However, at times, the distorted vocal effects and layers come across as grating, alongside a few filler tracks that don’t stand out as much as the lead singles.  Every instrumental performance is vibrant and tight, despite cuts like ‘What’s So Bad About Being Lonely’ and ‘So Stoned’ being the weakest on here.

For the most part, ‘Chosen Family’ is a heartfelt second album that solidifies Thin Lips’ expansive songwriting abilities and successfully pushing the envelope of indie via wholesome power-pop.

‘Chosen Family’ by Thin Lips is out now on Lame-O Records (US).