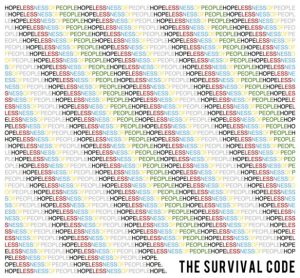 There’s a reason that early- and mid-2000s Brit Rock is remembered with such fondness. When the only rock bands of note the UK produced were of the throwaway indie variety that would not age well whatsoever. The likes of Hundred Reasons would open so many doors for bands to break away from a regimented style, and get success from doing it. Even if the Brit Rock ethos has somewhat shifted in focus over time, it’s no wonder that plenty of new bands still adhere to that older way of thinking.

What’s even better is that they tend to be pretty good at it, too. Just take The Survival Code on their new album ‘Hopelessness Of People’. Condensing classic post-hardcore for a two-piece configuration without losing any of the muscle. Even if it’s not pushing the envelope in any way with how prominently its influences are worn – the huskier end of Gary McGuinness’ vocals can be strikingly reminiscent to Hundred Reasons – the likes of ’Anything Goes These Days’ and ’Not Working display an ear for melody that’s absolutely undeniable.


Even then, it’s not as if this is a clear copy-and-paste job. There’s something a bit darker and more progressive in the scuffed creep of ’This Time Around’, and ’Next Step’ bulks up the instrumentation to go slightly heavier. The fact that’s worth pointing out does raise a point about the fidelity of some of these tracks, and how thin and undercooked they occasionally feel. A solid hook can solve a lot in this case, though, and The Survival Code do enough to mitigate any damaging flaws.

And really, the duo are able to do enough with the fairly limited source material they have as it is and make a solid album from it. Even if ’Hopelessness Of People’ won’t be a tremendous game-changer, in terms of hooks, melodies and enough much-needed grit to get by, there’s still a lot to like here.

‘Hopelessness Of People’ by The Survival Code is released on 31st August on Good Deeds Music.