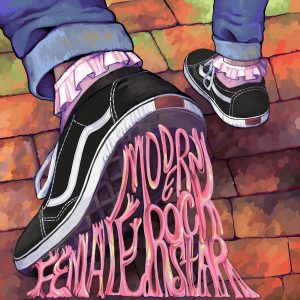 Cleveland quartet The Sonder Bombs are set out for vengeance on the male-dominated scene with their debut album ‘Modern Female Rockstar’ and the choice of a ukulele as their unlikely weapon. The uke-band first formed two years ago and from then has since accumulated over 7,000 monthly listeners on Spotify. They shed a different light on gender politics by using frontwoman Willow Hawks’ soulful high notes to counteract the light heartedness of the instrumentals against the harsh commentary within the album.

First single ‘Title’ starts with a bitingly critical statement, “I don’t wanna be your merch girl, I wanna be your goddamn idol. And I don’t wanna work twice as hard for the same motherfucking title.” The striking message foreshadows the humorous tone of the album with fiery punches at the stereotype of women in the music industry.

‘Something I Said’ begins with a slower tempo and uses Hawks’ acrobatic vocals to emphasise the sarcasm of the lyrics, but then ends with a faster tempo and vocal soars for the aggressive element of the track to represent the confusion and betrayal when a loved one leaves. The sub-minute track ‘Shoot 2 Kill’ is cleverly placed halfway through the album, as it uses the rapid beat of the drums to create the feeling of a dancing flash mob with the satirical fantasy of an enemy’s death. The memorable line “I think about profiting from your death”, releases your angsty teenage rage and holds similarity towards Paramore’s ‘Brand New Eyes’ days.

The album ends with the whimsically titled ‘Twinkle Lights’, a journey travelling back to Hawks’ former selves during her crucial teenage years. The slow drum beat creates an unapologetic feeling as Hawks’ is no longer doubtful of herself. The band have created an honest and political album for women especially and have begun their new era of music as a socially knowledgeable and daring form of pop-punk.

‘Modern Female Rockstar’ by The Sonder Bombs is released on 12th October on Take This To Heart Records.