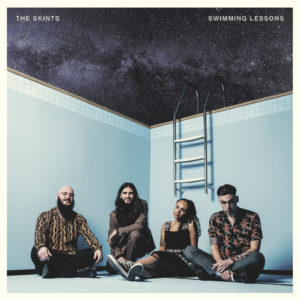 For as often as it’s felt like The Skints deserve to be included in the bigger British rock conversation (really ever since the opened for You Me At Six in 2013), they’ve never really ended up there. It’s not that hard to see why either; ska and reggae have frequently been difficult styles for many to swallow, something which has resulted in their genre-spanning approach never having the accessible legs that many would want.

That doesn’t look to change either, because ’Swimming Lessons’ is the same wide-reaching fusion of sounds that’s no more streamlined, but continues to mark out The Skints as such a vibrant, colourful prospect. It’d be easy enough to file them as another Specials-worshipping ska band with tracks like ’Restless’, but with the popping electro-reggae of ’Gets On Top’ and even the pop-punk flourishes on ’Learning To Swim’ and ’What Did I Learn Today’, the melting pot becomes a lot wider, much to the band’s benefit. There’s a welcome diversity here, and it makes ’Swimming Lessons’ feel far more fleshed-out overall.

That’s not to say it’s all perfect; the transitions between punk and watery ska on ’Learning To Swim’ can feel a bit stilted, and the acoustic snoozer ’Donkey Brain’ just generally feels like a misstep overall, feeling too disjointed. Then again, for an album thematically drowning in the mire of Brexit, such turbulence at least makes sense, and the pick-and-choose aspect of The Skints reinforces the diversity and multiculturalism within them as a band. It’s easy to trace where those cultural touchstones lie, and it does make ’Swimming Lessons’ a satisfying listen overall.

And that’s really where The Skints’ appeal lies the most. They’ve become incredibly good at what they do, and ’Swimming Lessons’ is no exception, especially given the breadth of ground they cover and just how well they can pull it off. It still won’t be for everyone, but there’s a lot to like here regardless.

‘Swimming Lessons’ by The Skints is released on 10th May on Easy Star / Mr Bongo.