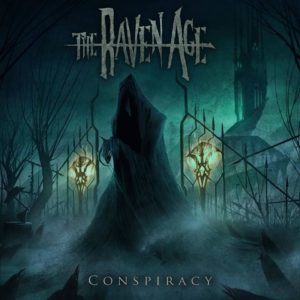 It feels like The Raven Age have been around for ages but have rarely made waves that are all that significant. It doesn’t help that the similarly-named RavenEye fill a similar hard rock niche, but for a band who shared stages with acts as revered as Iron Maiden and Anthrax – not to mention featuring George Harris, son of Maiden bassist Steve Harris amongst their ranks – their reach hasn’t gone as far as it possibly could.

Granted, that alone might be what’s putting people off, especially given that nepotism in rock has historically never turned out well in the long term. It’s a shame if that’s the case though, as The Raven Age are definitely decent on ’Conspiracy’, and as far as no-frills metal goes, they get the job done. There’s definitely more of an edge here than a lot of their contemporaries with actually decent crunch in the guitars. While on tracks such as ’Fleur de Lis’ and ’The Face That Launched A Thousand Ships’, they draw on various aspects of mythology, which is definitely a novel touch.

That’s not saying that this is fantastic, at its core, it’s easy to see where the similarities to a lot of radio-rock mush can be drawn. The rudimentary approach to metal lacks a bit of colour and runs on for way too long, and new vocalist Matt James takes a very performative approach to the rock frontman role that can really feel overdone at points. It’s definitely an album that could afford a bit of trimming back and reassessing, if only to let a pretty strong foundation shine more.

But with that foundation and genuinely good ideas at their disposal, The Raven Age already have the upper hand against so much of the competition. Maybe taking over the world isn’t on the agenda just yet, but if there was one band from this scene who could warrant going on to bigger things, ’Conspiracy’ would suggest them to be it.

‘Conspiracy’ by The Raven Age is released on 8th March on Corvid Records.