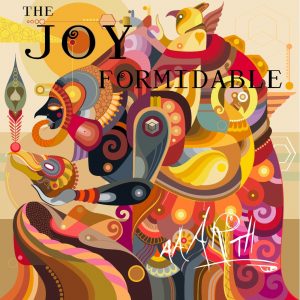 There comes a point in many band’s careers where trying something new is the only legitimate option left to turn to. Churning out the similar content time and time again serves no one, artist or fan, and pushing your sound is the best means for progress and retaining interest. For Welsh alt-rock trio The Joy Formidable, ‘AAARTH’ is their step into the unknown.

The group’s fourth studio album sees them break free from conventional indie-rock, as they stretch out into the psychedelic. This is largely thanks to the band, in particular, frontwoman Ritzy Brian, uprooting themselves and heading to America’s south-west, where Brian now lives in Utah. As a result, the album carries with it an experimentation of desert-rock that draws on Western themes and aesthetics – be it the sandy intro to ‘Cicada (Land On Your Back)’ or the plodding, acoustic guitar beneath the zipping slide on ‘What For’ – while also veering into Eastern tones with screeching, Sitar-esque guitar through the album’s core.


The album’s artwork, as well as its peculiar title, represents both the strive for musical vibrancy and expression of lyrical frustration behind the record respectively. The lyrical tone of the album offers a reaction to global socio-political injustices, with the title feeling like a cry of anger that resonates throughout the rest of the record – like on frantic opener ‘Y Bleun Eira’ and pounding single ‘The Wrong Side’.

For all its aiming to be different, ‘AAARTH’ does deliver a fresh sound, but at times feels like it’s trying a little too hard – take the eccentric ‘Dance Of The Lotus’ or aforementioned opener for example. As such, the record loses a little direction in favour of being overly experimental. But this is, without question, The Joy Formidable as you’ve never heard them before, and a leap this big deserves a great amount of credit.

‘AAARTH‘ by The Joy Formidable is released on 28th September on Hassle Records.