Review: The Jellycats – When I Do 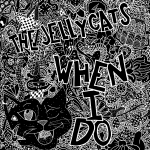 The Jellycats are an up-and-coming five-piece British Ska band. The Jellycats have had an exciting year, supporting bands such as Blink-182, Bad Manners and [Spunge]. The band also played at a variety of festivals such as Download, Slam Dunk and Hevy.

However despite all of this, their debut album, ‘When I Do?’ proves to be an unimaginative record that lacks variation and unfortunately thrives on silly humour. The album stars cheeky high-pitch squeeky vocals from Emma May that leave your ears feeling violated. Although you’ve got to give The Jellycats credit for injecting their own personalities into the album and for trying to be innovative. The musicians are highly talented, with awesome trumpet, trombone, guitar, drum and bass playing.  However, sadly every track sounds the same, leaving you disappointed.

The album begins with ‘Hysteria’ a fast-paced tune with a bouncy melody and catchy chorus. The second song ‘T-W-A-T’ follows in the same style, with more punchy tongue-in-cheek vocals, and awesome trumpet sounds. ‘British Poverty’ has an awesome catchy chorus, which really gets you singing along.

The album thrives off being comical, ‘Gay’ has hilarious lyrics; “Yea we were making out the other day, And he said babe, I think I’m gay.” The track ‘A Drummer’s Guide To Self Confidence’ is suppose to be a funny prank, that leaves you confused and completely not laughing-out-loud. ‘Stu Can’t Play The Drums’ is another pointless silly song taking the piss out of the drummer Stu Cooper; “Stu can’t play the drums ‘cos he’s really really shit.” These pointless tracks feel like the band were just trying to fill the album with something. These comical gags leave your face looking like you’ve just sucked a sour lemon.

The record carries on with more energetic upbeat tracks with ‘CrackHead,’ ‘Bipolar Love’ and ‘Your Friends’. All showcasing awesome instrumental talent. The album finishes on the hit ‘When I Do,’ an electric speedy track with a punchy melody.

‘When I Do’ is an unimaginative wannabe-comical ska album that screams wasted talent. The band has certainly found their own style and sound. However, to be a chart-topping album it needs to be more diverse. Unfortunately, every song sounds the same and the comical value just doesn’t add up. The Jellycats are an extremely talented bunch that need to seriously think about what direction they wish to head in for the future.

‘When I Do’ by The Jellycats is available now on Bandcamp.