Review: The Hold Steady – Thrashing Thru The Passion 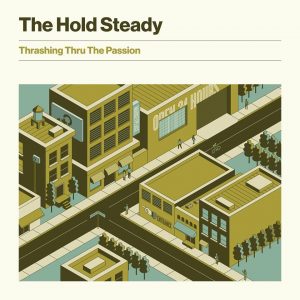 Brooklyn’s The Hold Steady are back with album number seven. ‘Thrashing Thru The Passion’ comes from far less rocky place than 2014’s ‘Teeth Dreams’. With the majority of the band approaching their 50s, recording took place in a relaxed manner, and you can tell. It’s a comfortable album, but it’s laced with a real sense of fun.

Having reunited with multi-instrumentalist Franz Nicolay, it’s their first album as a six-piece. Allowing a very fleshed-out sound. Notably, it’s less guitar-led. Instead, they use riffs and licks to add a mischievous air, especially on songs such as ‘Epaulets’ and ‘Entitlement Crew’. Although a horn section might sound like overkill, it gives ‘Traditional Village’ a very different feel and works surprisingly well. They use a similar trick to energise ‘T-Shirt Tux’, which is sure to have you dancing in the aisles.

This time around Craig Finn’s sing-talking vocal style feels effortless.  He disguises obvious rhymes artfully on ‘Entitlement Crew’ and wrings out real emotional during the laid-back, quiet contemplation of ‘Blackout Sam’. His credentials as a storyteller are on top form too. Nowhere more so than the heavily sneered ‘Star 18’. It’s wonderfully verbose and feels like a classic. Yet, it fits comfortably with the band’s more relaxed sound, making the most of the guitars without being an outright rocker. It pushes a strong Springsteen vibe to the forefront.

However, being a sextet can make songs feel bloated; ‘Denver Haircut’ starts like a queue of people trying to get out of a train carriage. Yet, when they strip things back, each instrument has little space to breathe and add its distinct footprint. This makes ‘You Did Good Kid’ and ‘The Stove & The Toaster’ highlights and ‘Confusion In The Marketplace’ something of a masterpiece.

‘Thrashing Thru The Passion’ is The Hold Steady making music their way, for their enjoyment. Although at times it can feel overstuffed, it’s the sound of ageing gracefully captured on record.

‘Thrashing Thru The Passion’ by The Hold Steady is out now on Frenchkiss Records.