Review: The Get Up Kids – Problems 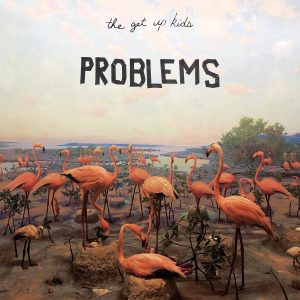 Ever since reforming over a decade ago, The Get Up Kids haven’t always been the most active band and that’s understandable. A blend of other projects and fatherhood have been the priority. Nevertheless, ‘Problems’ is their first album since 2011’s polarising ‘There Are Rules’, and while that album wasn’t on par with their more cherished work, last year’s ‘Kicker’ EP could considerably be seen as an upwards turn.

Much like that EP, ‘Problems’ is more in line with the bulk of the quintet’s discography albeit one with a wiser, lyrical eye. The opening pairing of ‘Satellite’ and ‘The Problem Is Me’ wouldn’t sound out of place on ‘On A Wire’ or the under-appreciated ‘Guilt Show’. Together, they set up the musically bright yet lyrically sincere tone of the record.

Admittedly, ‘Problems’ has its fair share of energetic hooks, making it a pleasing and digestible record to take in. The quintet, especially Pryor, has a proven flair for writing songs with a sensible pop ear. It allows songs such as ‘Now or Never’ and the bass-driven ‘Lou Barlow’ to carelessly border on alt-rock/powerpop lines. The downside of this is that the occasional track (‘Fairweather Friend’ and ‘The Advocate’) fail to develop a solid identity, ultimately coming off as routine TGUK.

While they have, to an extent, stayed in the same stylistic mould, the band’s perspective songwriting has become introspective. Lines like “I used to be good once but now I get nervous” on ‘Symphony of Silence’, and singing about old friends being scared of the end (‘Common Ground’) are examples of this, allowing the band to take a step back and question their past, present and future.

Unquestionably ‘Problems’ isn’t going to be as revered as their past work, or attract new admirers, yet it’s not a case of reaching for past glories. Besides the occasional hindrance, The Get Up Kids have provided an enjoyable return.

‘Problems’ by The Get Up Kids is released on 10th May on Big Scary Monsters (UK) / Polyvinyl Record Co. (US).