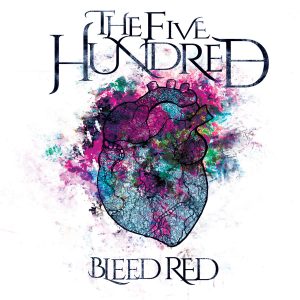 A common theme in tech-metal seems to be making the biggest, most progressively high-minded pieces possible, simply to outdo anyone who’s come before. Sure, it can be impressive to hear these winding eight- or nine-minute-long suites, but it reaches a point where the impressiveness wears off and it becomes a chore to get through.

That’s something that already gives Nottingham’s The Five Hundred the upper hand on their new album ’Bleed Red’. At its core, there’s an unmistakable essence of a tech-metal album (just listen to the polyrhythms that run through ’Smoke & Mirrors’ or the surgical sharpness of ’The Noose’), but paired with a clear melodic metalcore influence to drastically tighten things up, it’s so much more immediate. This is an album that substitutes hugeness in runtimes for hugeness in a carnal, impactful sense, and is far more preferable by doing so.

What’s even better is that there’s enough behind The Five Hundred to totally back this up. Of course the looming size of ’Buried’ or the melodic focus of standout ’The Narcissist’ does a lot of heavy lifting. However, with lyrics driven by everything from guitarist Paul Doughty’s OCD and Tourette’s syndrome to bassist Andy Crawford’s former gambling addiction, there are stakes that go relatively unexplored elsewhere, but that The Five Hundred are able to make hugely compelling. Especially for a debut album, pretty much everything is weighty and hugely refined.


To nitpick, there could definitely be a bit more variety here and there (such is the case with the vast majority of tech-metal), but ’Bleed Red does plenty to establish itself as one of the metal debuts of the year. It’s hardly pushing boundaries or anything, but for a layered, complex listen, yet one that remains wholeheartedly accessible and human, you can’t go wrong with this.

‘Bleed Red’ by The Five Hundred is released on 17th August on Long Branch Records.