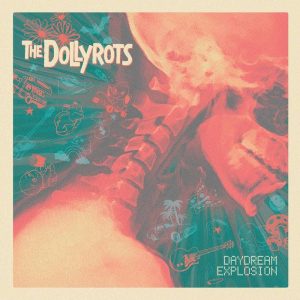 The Dollyrots are one of those rare pop-punk bands who focus more on singing about good times and good songs than attempting to incorporate emo tropes. They’re part of the Bowling For Soup umbrella (Kelly Ogden released an album with BFS frontman Jaret Reddick earlier this year) and new album ‘Daydream Explosion’ doesn’t deviate much from their typical formula. But if it isn’t broken, why fix it?

Opener ‘Animal’ is simply catchy as hell and a perfect way to begin. Sing-along choruses, power chords and catchy hooks make up a lot of their work, and this track is the perfect example. Other singalong moments include ‘I Love You Instead’, the epitome of fast-paced pop-punk, and ‘Oblivious’, a cheesy showcase of the band’s irresistible sound.

‘Everything’, ‘Naked’ and ‘I Know How To Party’ are the closest to the tropes of Bowling For Soup with lyrics and melodies you’d expect to find Jaret and co belting out. Is this a bad thing? Not at all, they’re entertaining songs that make you want to dance and sing and have a good time, and I’m pretty sure that’s the aim.

They know how to push the boundaries a little within their sound, however. ‘Flippy In My Red Dress’ is reminiscent Green Day’s ‘Hitchin’ A Ride’ with its bass-led structure (and lyrically references happy hour, though in a far more positive light). It’s a satisfying change of gear, much in the same way that the poppier ‘In Your Face’ switches the album up near the beginning.

From a technical standpoint, it’s safe to say that the duo’s musical performance on the record is possibly their strongest, and the lyrics have certainly moved forward from the cheesy lines like “my best friend’s hot“. At the end of the day, they don’t make music that pushes any deep meanings. Don’t go into this expecting something to push boundaries, go in if you want a good time, because you won’t be disappointed.

‘Daydream Explosion’ by The Dollyrots is released on July 12th on Wicked Cool Records.