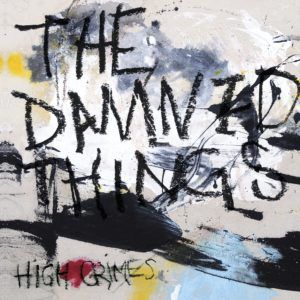 2010 to a lot of us probably doesn’t feel that long ago. Nine years ago however, Anthrax’s Scott Ian, Keith Buckley (Every Time I Die), Joe Trohman and Andy Hurley of Fall Out Boy and Rob Caiggiano (now replaced by Dan Andriano of Alkaline Trio) were the most unlikely group of musicians to form a hard rock band together.

With a handful of festival dates in the summer of that year, it seemed that The Damned Things was a carefree outlet that never lived up to its potential. They still maintained a cult following however, and here we are now.

The biggest difference on ‘High Crimes’ compared to 2010’s Ironiclast isn’t so much each member’s role in the supergroup, but rather an emphasis on experimentation, not simply adding bits that sound like their day jobs to form a mish-mash of ideas. Not all of them work of course. The obnoxious vocal sample on ‘Something Good’ and the peppy synth accompaniment on ‘Storm Charmer’ become more of a hindrance to their formula, rather than a meaningful musical expansion.

Luckily, opener ‘Cells’ sees them venture drastically away from the Thin Lizzy/Led Zeppelin influences on their debut record and into something more captivating. It has all the sleazy, wild guitar licks you’d want from the spirit of rock and roll, minus the cringy misogynistic overtones, or egocentric bullshit your dad still listens to.

In recent years, Keith Buckley has stated he didn’t want to write cliche lyrics anymore. While its arguable there aren’t any memorable one liners, instead his vocals ornament the driving instrumentals with the occasional scratchy yelp, breaking the melodic choruses up. The most noticeable example being on the seductive ‘Carry A Brick’.

When they are giving their best output however, The Damned Things aren’t trying to be profound. ‘Let Me Be Your Girl’ and ‘Young Hearts’, in particular, are fast-paced and gritty, without a doubt throwing us back to a time when Hurley and Trohman were writing far more aggressive songs.

At face value, ‘High Crimes’ is a well-rounded return for the mismatched supergroup.

‘High Crimes’ by The Damned Things is released on 26th April on Nuclear Blast.